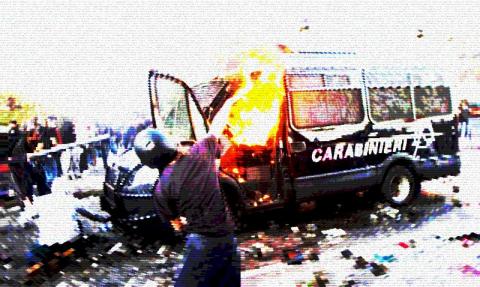 From Act for Freedom!, Italy

While the flames of revolt are exploding over half the world, here hyper-technological authoritarianism seems to be coming up against less and less hostility of populations no longer able to raise their heads and perhaps even unable to recognize their enemies.

Thus, if on the one hand we are finding it hard to discover or rediscover projectualities and practices capable of putting the adversaries in difficulty, then on the other hand, men in uniform and authorities are storming ahead in a repressive toughening that is striking those who, from the streets to the prisons, are refusing to blend in.

Nothing new, that is true, but it seems right to us to highlight the steps that we feel characterize the trajectory leading to an increasingly unliveable and oppressive future.

In this respect, two recent events have given us food for thought.

From the beginning of November there has been an exacerbation in the search for Carla, a comrade on the run since last February when she was struck by operation “Scintilla” involving the struggle against CPRs (pre-removal immigrant detention centres) in Turin and leading to many arrests and the eviction of the Asilo squat. With raids, intimidation of relatives and friends – threatening them that they would be charged with aiding and abetting, police blocks and strong-arm tactics, the French and Italian police (Carla also has French citizenship) have been trying hard to isolate the comrade on the run, to no avail.

Perhaps the extensive solidarity that welcomed and defended Vincenzo Vecchi when he was in hiding for so long in Bretagne annoyed the various judges and investigators. He was recently released by the French authorities due to irregularities in warrants and various papers by the Italian authorities in their haste to get his extradition for the events of the Genoa G8.

Perhaps, in an investigation that is turning out to be more and more shaky (that which struck Carla and the other comrades in Turin, including Silvia who is still under house arrest and Peppe who was arrested in Verona on 26th November), they are trying to get the big coup, “capture of the terrorist on the run”, so as to give back a bit of lustre to the endeavours of the investigators and prosecutors in anticipation of the closure or extension of investigations, or the start of the trial.

Or perhaps it is just one more step in the criminalization of solidarity in the incessant strategy of Power to persecute behaviours, relations, affections that must not gain the approval of its wasted, frightened subjects, digitally hyper-socialized but with no heart, conscience or soul.

The same is happening with the situation of Manu, a compa of the Brescian Pre-Alps in prison for months accused of giving support to Juan, another comrade of ours now in prison after being on the run for about two years. On 22nd November Manu was sentenced to 3 years and 2 months with this accusation and a judge subsequently refused him house arrest.

In a bold as it is shaky accusatory set-up Manu also had the aggravation of terrorism added to his charge as he allegedly helped a comrade on the run knowing that he was under investigation for “terrorism”, whereas both he and public opinion only became aware of this after his and Manu’s arrest. Another step to scare, to outlaw acts of generosity and solidarity along with the intimidations and prevarications which have been inflicted on neighbours, comrades and relatives guilty of not abandoning Manu into the hands of “Justice”.

Evading investigations and prison, living the adventure, the anxieties but also the possibilities of being on the run and clandestinity have always had and always will have a place of respect in the paths of those who love the struggle and freedom. Carrying out solidarity with those on the run in the many ways in which this can be expressed will always be the choice of generous hearts, of human and communitarian dignity, and the concrete sign that one has nothing in common with the miserable world of those who persecute and imprison.

It is pointless searching for her…she will always be here with us! Carla, keep running free!

No sentence can erase the pride of solidarity and complicity against arrest warrants, bars and locks. Manu free!

Love: a counterpower to capital worthy of its name