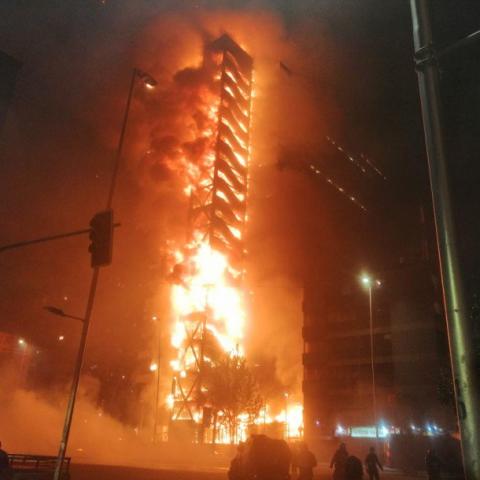 Introduction of Analysis of the Revolt in Chile

The following is the introduction to “On Insurrectional Ghosts and False Flags,” a text by Antagonistic Nuclei of the New Urban Guerrilla that analyzes the revolt that has taken place in Chile during the fourth quarter of 2019.

The use of revolutionary violence has been vilified, and unimaginable amounts of blasphemies, myths and false rumors have arisen around it. We have heard that it is useless, that it contributes nothing, that it is only functional to repress, that it is used by infiltrators and/or immature elements, that it has short political projectivity, that it does not represent the people, etc., etc., etc…

In this text we will not attempt to make a detailed analysis of its use at the historical level. To do this, just look for examples in any history book. Its contributions to the struggle that dignifies the lives of people, regardless of where it is used, the regime it fights, or the idiosyncrasies of those who employ it, has contributed significantly to its development. It is not necessary to mention that neither slavery, nor feudalism, nor monarchies, nor abusive working hours, nor colonialism, nor the most basic civil rights, nor the number of dictatorships have been defeated with only peaceful methods. Therefore, we consider that discarding this tool is nonsense in relation to the revolutionary cause.

In addition, it should be noted that if violence (the use of physical force) was really as harmful as it is usually said to be by those who want to delegitimize it, no State would take the trouble to want to monopolize it until we were fed up, trying to validate this decision in pathetic communication campaigns that only they seek the washing of image, and the political approval of their inhabitants.

Understanding this, we refuse to discard a fully valid political tool, such as the use of violence against the devices that oppress us. We are in favor of the direct attack that, aiming at the structures of power that restrict our freedom and repress our lives, becomes a legitimate response to the centuries and centuries of structural, daily and systematic violence that exerts a handful of privileged over the vast majority of the population.

Our brief insurrectionary history (2011–2019) demonstrates this. In the past we have placed bombs, destroyed bank branches, attacked the meeting points of the powerful, planted simulated explosive devices, burned down buses, expropriated resources, vandalized symbols, attacked the police bastards, and practiced sabotage and harassment of our executioners, always trying to be careful not to hurt passers-by or civilians that have nothing to do with the objectives of our actions.

So, we are not afraid to say it. We have attacked violently on many occasions the Centers of Power where our exploitation is planned. We have done it and it fills us with pride, because we understand all these actions as a tiny response to the violence that the owners of this world intend to subject us to.

In other words, we have used minority violence. We know about its effects and consequences, and we understand very well its political reach. Violence is a powerful weapon that can change the course of history if one knows how to apply it correctly. And not only the course of history, but also the way of relating in society. It all depends on the objectives it pursues.

For our part, we seek to live without masters or bosses, in harmony with nature and its animals, in a dignified and responsible manner, respecting each other, understanding that each one has different abilities, but that each one is of equal value for the development of people, self-education, sharing in free association for the pleasure of doing so and not for the need to survive, relying on values such as solidarity, altruism, honesty and mutual support.

However, the capitalists who politically control the state apparatuses, which include (obviously) the FF.AA. [Armed Forces of Chile] and police, pursue very different objectives, since they only seek to maintain their privileges at the cost of suffering and exploitation of a vast majority and the surrounding environment.

Therefore, we want to be categorical in pointing out that not everything that smells of smoke and gunpowder necessarily comes from friendly fire. The rich and powerful have used the use of violence since time immemorial to keep us at bay. They know it and we should know it too. Their privileges are sustained not only on the basis of the violently unequal pyramid system that keeps very few above and far below, but – and above all – for the disproportionate control in the use of force.

Therefore, it is necessary to understand that militarily speaking, the correlation of forces is tremendously disparate. The enemy surpasses us, and by far. That is a fact that we assume nobody will doubt.

Therefore, our call is clear: Let us not let our own desires be reflected in actions that we understand are part of the military strategy of the State. History shows us that it is not always easy to interpret the complex strategies of the enemy, but that with dedication and a little patience, it is possible to notice their possible future movements.

Knowing where the enemy is moving and where it is going can really mean small strategic victories for the future.

What we say, we understand it very well because as a revolutionary organization we have set short, medium and long term goals to achieve certain objectives that, in strictly technical terms, could mean advanced positions on the road to generalized conflict. We move forward without stopping in that trajectory, so analyzing this matter is of vital importance if you really want to win some future and hypothetical rebellion.

In this sense, the situation in Chile today deserves this shared reflection, due to the simulacrum of insurrection that current conditions present. Therefore, it is important to submit to the analysis certain elements that are necessary to discuss in an open manner, to avoid raising false images, which have nothing to do with the steps taken by genuine comrades. That said, it can be understood that the following text is intended to be a small contribution, a contribution to the fraternal debate, to elucidate who it is when it comes to prompting the revolt and knowing where we really are going.

Next, we develop a series of references that point to that. To clear doubts and myths about what is really happening in Chile. However, we do not want to be misunderstood, we are not calling for inaction. We simply call for caution. To take care of each other and not to fall into the power game. That is why we share these reflections, which we hope will be well received, even though they may not be to our liking.

This text has circulated freely and free of charge in various spaces and places in the region dominated by the State of Chile, mostly in the Metropolitan Region (Santiago) and its surroundings, hoping to contribute fraternally to the joint reflection on the revolt that has taken place in Chile during the fourth quarter of 2019.

Although the text is quite long, it is delivered – in general terms – an analysis of the revolt and the first actions coordinated and large-scale that emerged without still existing necessarily a massive consciousness that would push them. Then, many of its pages contain material that is related to the study and/or analysis of military strategies that States have used both nationally and internationally to face social crisis situations or to validate repression policies against certain groups of people or ideas For this, we use several historical examples of most recent past (Cold War in Europe and Latin America), exemplifying with reliable data that those who always hold power have used military tactics (legal or illegal) that allow them to keep their privileges. The intention then, was to glimpse similarities and differences from the current context in which the revolt takes place in our territory, with these other experiences, since according to our point of view, many (but we want to believe that not all) of the first avant-garde actions that were generated in the first days of riots could come from the state apparatus: police, or failing that, para-military. Hence the importance of comparing military strategies and tactics from other places and times. This, assuming that while in our territory there was a civil disobedience, the state apparatus precipitated a generation of more chaos, functional to its policies that is the germ of revolt that could develop in the awareness of those who raised legitimate demands, a social product of the exhaustion of 30 years of systematic abuse…

Finally, note that this time we took advantage of presenting the logo which represents us, which also represents the characteristic colors of anarchist struggle, in addition to the red star, stained with blood of those who died seeking freedom. By this time, it has been six years since our brother Sebastian Oversluij Seguel (Angry) was killed by a State / Capital mercenary on the morning of December 11, 2013 in a frustrated bank robbery in the commune of Pudahuel. Our story is written hopelessly with the blood of our comrades.

As a contribution of insurrectionist memory, we can point out that in the first action we took for an already remote May 2011, we use a different logo sketch, based on the silhouette of a crow within a circle, which had inside the name of the organization with white letters (the police know it through pamphlets left in place). That first logo sketch was made by Angry. After his death, we decided not to use that drawing again, understanding that with his departure, a part of us also died. We share this memory to honor the memory of our comrade. Six years after his death in action, his insurgent spirit remains intact in the revolt.

We fight for dignity and also for freedom.

To contribute to the destabilization of the Capital and State that oppress us!

The real terrorists are in La Moneda, the Congress, the military and police barracks and in their media!

While there is Misery there will be Rebellion!

P.S. We encourage the reproduction of this material partially or in its totality by whatever means. If a copy has arrived at your hands and you think it is appropriate, do not hesitate and share it. Political reflections also feed the germ of the revolt.