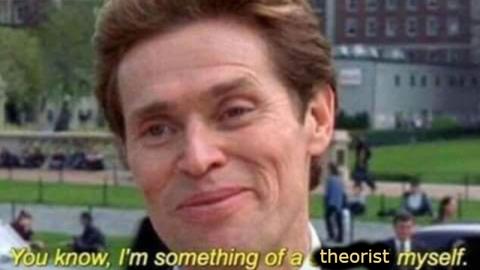 Last week some friends and I (of which I have MANY thank you) started discussing something along the lines of “why theory?” That is, why does it matter if we know things, if we have a theoretical grasp on the world we, maybe, live in.

The context of this was a book describing the present as not just capitalism anymore, but something else that requires a fresh understanding and approach. The result of this knowledge/theory for the author was pretty straightforward, that we should build consciousness within the new classes formed by this new mode of production (they are super Marxist). This pointy logic of problem>understanding>action is appealing in so many ways, particularly by having a clear conclusion for you to arrive at, handing you a project to manifest the solution. But what about theory that isn’t so clear-cut, that doesn’t give you such easy answers? Perhaps an example of this is found in Urusla Le Guin’s essay “The Carrier Bag Theory of Fiction”:

“We’ve heard it, we’ve all heard all about all the sticks and spears and swords, the things to bash and poke and hit with, the long, hard things, but we have not heard about the thing to put things in, the container for the thing contained. That is a new story. That is news.”

Theory not, just, as a club but potentially as container for a life. So my question to you, throngs and multitudes of anews, how have you contained your life in theory? How have you integrated theory into your relations and everyday interactions? How has it changed the way you act with lovers, friends, family? Where did you find that theory? Who wrote it*? How has your relationship to theory changed over time?

*I am mostly talking about books here, but it can come from anywhere