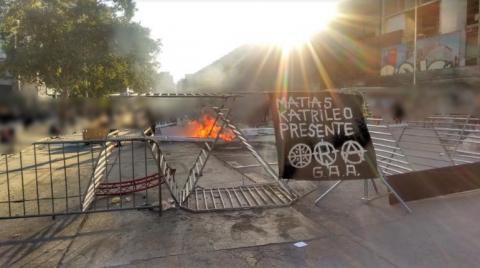 As an anarchist group we continue to be present in the streets, in the chaotic protests and creating initiatives in our villas, barrios and problaciones, spreading our ideas and values in the heat of the revolt. In this way, in these fierce times of struggle against power, the year ended with barricades and demonstrations. Putting aside the celebrations for the coming of a new year, the people lived the festival of fire, the barricades and the confrontations against the police henchmen.
So a few days passed and we quickly reached a new commemoration, conscious people do not forget the death of a person by police bullets in a context of territorial recovery in the Willimapu (1): We refer to the Weychafe (2) Matías Katrileo (3). His memory is translated into the struggle from the Mapuche communities in resistance and from the cities, where the force of the Kutral (3) swept away the symbolism of the institution that took his life.
The dignified dedication and resistance of the Mapuche people in the ancestral lands of Lavkenche, Huilliche, Pikunche and Pehuenche are the inspiration for the struggles that we have been carrying out in these areas since the beginning – hydroelectric, thermoelectric, mining, industrial fishing, among many other invasive practices that have been dedicated to depredation of land and animals for enrichment purposes supported by the State and protected by its police hit men and the landowners, among others.
Finally it is important to emphasize that we must continue to maintain the memory of our comrades who are no longer among us. All those who fought with dignity against the world of power and for a better life are part of the revolt, just like the comrades who are prisoners of war, we cannot forget them.
On the 78th day of social revolt we are still on the warpath.
¡Matías Katrileo presente!
Mapuche prisoners, subversive prisoners and prisoners from the revolt to the street now!
While misery exists, there will be rebellion!
Anti-Authoritarian Action Group
Pikunmapu, Valle Central
January 2019
(via Contra Info, translated into English by Anarchists Worldwide)

Translation Notes:
1. The Willimapu are the occupied Huilliche-Mapuche lands from the Toltén River to the Chiloé Archipelago.
2. Weychafe is a Mapuche word for warrior.
3. Matías Katrileo was shot from behind and killed by the Chilean National Police Force during a Mapuche land reclamation action on the Santa Margarita estate on January, 3rd 2008.
4. Kutral is the hearth / fireplace inside the ruka, the traditional Mapuche extended family dwelling. It is always placed at the center and always kept burning.

The Return Fire Movement: Self-preservation is a human right