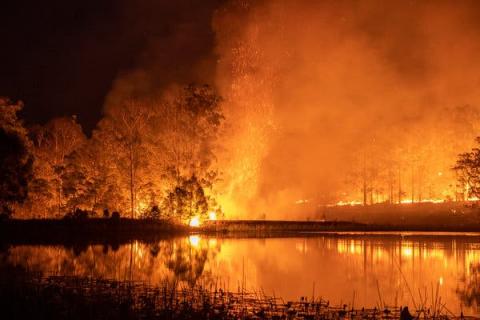 This article first appeared in The Anvil, [different The Anvil – ed.] vol.8 no.6, published on 22nd December 2019. Since then the fires have spread even further and the death toll has risen markedly. —- For the last six weeks, the eastern States of Australia have been suffering an unprecedented wave of bushfires. There have also been a number of bushfires in Western Australia. One of the driest winters on record has been followed by a warm and dry spring. This has led to huge areas of the continent being tinder dry and ready to catch fire far earlier than for a normal fire season. What we are seeing is unprecedented in its breadth, intensity and timing. —- Sydney has been shrouded in smoke for over a month. The Gospers Mountain mega-fire has burnt out 450,000 so far. The Commissioner of the NSW Rural Fire Service says they have dealt with 8,500 fires this season already – and it’s only the start of summer. This is climate change in action.
In recent years, firefighting in rural areas in Australia has been put on a much more scientific basis than previously. More thorough and intensive organisation has meant that fewer people die and fewer houses are lost. The firefighting effort in this fire season has been massive, with overwhelming community support for the volunteers and professional firefighters working day and night to protect lives, homes and livelihoods. Nevertheless, even this has been insufficient to prevent deaths in this unnatural disaster.
The political situation is spinning out of the control of the denialists in the Government and the media. The initial statements pointing out the connection between the unprecedented levels of greenhouse gases in the atmosphere and the unprecedented severity and earliness of the fire season were met by a storm of Right wing propaganda criticising them for “politicising the tragedy of the bushfires”. As the fires have continued, though, this position has become unsustainable. Volunteer firefighters, the United Firefighters Union and the chiefs of emergency services bodies have pointed out the connection. Some people who have lost their homes to bushfire have taken the burnt wreckage of their houses to Canberra and placed it outside Parliament House. The denialists have been reduced to muttering rather than shouting everybody down.
The forces of climate change denial were cocky after the Liberals won “the climate election”, with some even claiming the issue was dead. This was delusional thinking. A single hot summer was always going to pull the rug out from under them and hammer home the fact that climate change is real and happening. Before summer had even started climate change was back and big. The question of the moment is: what should we be doing?
The Melbourne Anarchist Communist Group believes that the School Strike for Climate movement has great potential and that it should be joined wholeheartedly by the unions. School strikes should be turned into workers’ strikes. In Australia, the next global school strike day should be the occasion for mass co-ordinated strikes by workers from as many industries as possible. They should build towards a general strike. The power of capital arises in the workplace and it is only by organising there that workers can wrench power away from the capitalists and wield it themselves.
To achieve this objective, Anarchists need to be active in their unions, pushing for rank and file groups to work with communities in planning for a Just Transition. They should also be forming rank and file groups to press their unions to join the strike movement. These groups also need to be ready to bypass the officials if they won’t act. The capitalists won’t save us – the workers have to do it themselves.

Tags:
anarchist=worker
the government is broken oh no