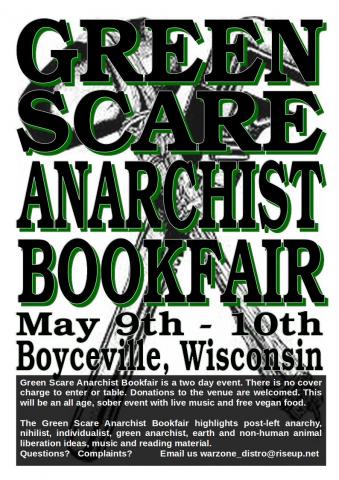 With hysterical excitement, we announce the dates of this year’s Green Scare Anarchist Bookfair!

In the midst of two governmental forces flexing with military attacks, we celebrate The Coming Collapse with live music, free vegan food, sobriety, and anarchy on May 9th through the 10th!

Does the lock-step march of industrial expansion, technological dominion, and wage-slavery have you feeling fatigued? Does your heart ache from witnessing the utter failure of leftism and positive politics? Are you fed up with the constant demand of identity politicians?

Does your shaven head miss the white dreads you exchanged for allyship?

Within the illuminated void of hopelessness there is a black light that never goes out. With just a little luminol, we can see the blood bath of society – and we know there will be more. But rather than allowing this reality to paralyze us with this depression, we embrace it with rebellion – and a party!

We invite you to vent! laugh! dance out of step! sing and howl maniacally to the rhythm of civilization’s death spiral!

****This is a final call for tablers and musicians. Save the date!****

The Green Scare Anarchist Bookfair will be eschewing a ‘safer spaces’ policy in favor of a Dangerous Space Policy.

This means that we expect all attendees and vendors to be responsible for their own actions, and the potential repercussions of their actions. As hosts of this event, we refuse to assume the role of “police” or “security” to mediate conflicts that happen between people. We personally will not be used as a security apparatus to kick anyone out of this event, unless the conflict is with us directly. Everyone who attends is expected to utilize their own individual agency in directly dealing with and solving their problems with others. Therefore, this event is a dangerous space for anyone who disrespects the space and those occupying it.

We accept that oppression based on identity exists in our present society, but we are not interested in perpetuating this paradigm. All voices here are weighed based on the merit of their experience, not the identity of the person who voiced them.

This should go without saying but to make it abundantly clear, this is an anti-capitalist, anti-fascist event.