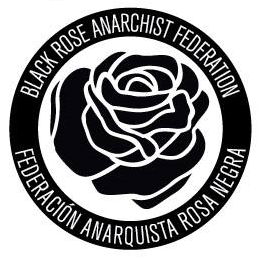 “The greatest purveyor of violence in the world: my own government.” -MLK

Black Rose Anarchist Federation / Federación Anarquista Rosa Negra unequivocally condemns the U.S. assassination of Iranian General Qasem Soleimani in Iraq. This is a provocation and an act of imperialist aggression that adds to a long history of U.S.-led military and economic violence in the Middle East, including the recent crippling sanctions which most severely impact poor and working class Iranians. This assasination has every possibility of escalating into a large scale armed conflict — something that would undoubtedly lead to the immiseration of millions in the region.

We share the view of fallen Black freedom fighter and Civil Rights icon Martin Luther King Jr. that “The greatest purveyor of violence in the world: my own government. I cannot be silent.” Much of the world has become a scorched battlefield for over two centuries as the dark shadow of U.S. imperialism, resource extraction, and capital accumulation first spanned the continent, then the globe. Through the colonization of indigenous peoples in the Americas to imperialist expansion around the world, this great purveyor of violence has displaced, imprisoned, tortured, enslaved, and killed untold millions. It is no surprise that in our time, through an endless “war on terror” that the darkest areas of this shadow have engulfed the broader Middle East.

We stand in solidarity with the people of Iran and the Middle East who have suffered greatly from U.S. imperialism. The 1953 CIA-orchestrated coup that ousted Iran’s first democratically elected prime minister Mohammad Mosaddegh and brought the oppressive shah back to power made the ground fertile for the Iranian Revolution of 1979. Since then, the U.S. has been directly involved in destabilizing both Iran, and later, Iraq; first starting with the Iran-Iraq war (1980). The Gulf War of 1990-91, the intermittent bombings as well as the sanctions and blockade that lasted through the 90s, the 2003 invasion and ensuing occupation, and the battle against ISIS can more accurately be viewed as a three decade long war waged by the U.S. Intermittent threats of war against Iran, crippling economic sanctions and drone warfare have finally come to a tipping point. The world waits in horror as lines are drawn in the sand and Trump openly threatens to commit war crimes in Iran through the targeting of cultural sites. Millions of people who are desperately trying to escape the clutches of this endless war have fled their homes: the U.S. is guilty of creating the largest refugee and humanitarian crises since WWII. We demand: U.S. Out of the Middle East!

As working people and revolutionaries in the U.S., we harbor no hostility toward the working people of Iran. In fact, we recognize that working people in both Iran and the U.S. have far more in common with one another than we will ever have with our respective governments, bosses and ruling classes.

We also recognize that General Soleimani was no friend to the people of the Middle East and North Africa. Our comrades in The Anarchist Union of Iran and Afghanistan made as much clear in a recent statement that they released on his assassination:

“Qasem Soleimani was a genocidal man that has killed thousands of men, women, and children in the conflicts in Syria, Iraq and Yemen. He lead sieges for Assad and recruited Afghan refugees in Iran, many of them children, to die in the Syrian civil war. This state assassination was carried out by the United States in the obvious interest of Donald Trump’s election and what was done has not been and will not be in the interests of the people in the Middle East”

As revolutionary anarchists we condemn U.S. imperialist aggression. We also condemn supporting the political program of the Islamic government in the name of a bogus “anti-imperialism.” We must recognize that governments, nations, politicians, and uniformed authoritarians will never fight for our collective liberation.

Treating revolution as an exercise in rooting for one side or the other in geopolitical contests has been an abject failure for working people in all countries. Instead, we stand in solidarity with those who mobilize against Iranian austerity measures, with feminists, socialists, anarchists, and labor militants who have fought and continue to be repressed by the Islamic Republic. We also stand with the recent popular rebellion in Iraq as well as the besieged peoples in Syria and Rojava. We see all of these movements from below as part of an international struggle for liberation. One of the greatest dangers of Trump carrying out this assassination is that it will undermine the popular movements in Iraq, Iran, and Lebanon.

Our responsibility goes beyond simply condemning U.S. imperialist escalation in the Middle East as well as the political program of the Islamic Republic of Iran. We also must recognize and learn from the failures of the antiwar movement of 2003, which produced some of the largest protests in human history yet failed to stop the war in Iraq. Today we are left with the U.S. remaining in Iraq, which it has nearly continuously bombed or deployed troops to for almost thirty years. Generic calls for peace, petitions, symbolic mobilizations, canned speeches, appeals to the ballot box and pushing within the Democratic Party have to be put aside in favor of mass direct action advancing the demands of working people who face class warfare every day.

We assert that the only way to stop a war machine is to shut down the economy which enables it through mass disruption of business as usual. This would look like workers in strategic positions going on strike, social movements blocking or occupying railways, sea ports and military bases, and mass appeals to those in the military to refuse orders. There is recent precedence for this. During the war in Iraq, demonstrators shut down the financial district of San Francisco during a mass direct action in 2003, activists in Washington State temporarily halted military shipments by shutting down the Port of Olympia (the military has not used that port since 2007), 10,000 longshore workers went on strike against the war on May Day in 2008 in all 29 ports on the West Coast, and countless soldiers refused orders from officers, refused deployment, or went AWOL. While these forms of direct action should be celebrated as small victories, in order to effectively grind down the gears of the war machine, actions like these need to happen on a mass scale.

We call on all revolutionaries, working people, students, all people of good conscience, both young and old, to build capacity in their workplaces, neighborhoods, schools, and places of worship in order to materially oppose a war with Iran, and lay the groundwork for meaningful opposition to future wars. We call on U.S. soldiers to refuse and resist any orders to aid in this escalation and to evade deployment to Iran or the broader region. They will be enthusiastically welcomed and provided sanctuary and support in popular movements from below in the US (just as they have in the past). We recognize that it may seem social movements and the left are a long way from realizing these actions but by pointing to recent examples and building capacity we make these more likely to happen.

While Trump brazenly brags about a two trillion dollar military budget, and weapons manufacturers and the ruling class continue to line their pockets, those of us from below continue to struggle. People enlist in the military to escape poverty or to unshackle their debt from student loans, thousands die every year in the U.S. from lack of health insurance, millions are homeless while many more millions of homes lie empty. We do not want any more wars between nations, but we know that wars between classes are fought every day. It’s time to push back – in Iran, in Iraq, and in the heart of the greatest purveyor of violence in the world.

If you enjoyed this we recommend reading other organizational statements by Black Rose/Rosa Negra including One Month Since the Popular Revolt in Chile, Kavanaugh and a Feminist Movement Fighting to End Capitalism, and “Mourn the Dead, Fight Like Hell for the Living” – Statement on Charlottesville.