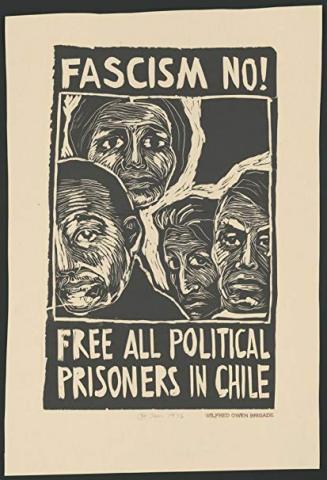 Dear all, As A-Radio Berlin we have recorded a call by the Coordinating Committee for the Freedom of the Political Prisoners of October 18th. —- You’ll find the audio (to listen online or download in different sizes)
—- here: —-
http://aradio.blogsport.de/2020/01/11/chile-13-19-1-2020-woche-der-solidaritaet-mit-den-politischen-gefangenen-semana-de-solidaridad-con-lxs-presxs-politicxs/
—- Length: 2:43 min —- You can find other English and Spanish language audios here: —- http://aradio.blogsport.de/englishcastellano/.
*********** Text of the call: —- After more than 80 days since the popular revolt started in Chile, the struggle and social organising persists, with an unyielding conviction to confront and break with this economic and power model which has perpetuated inequalities, injustices and abuses for decades. Without a doubt, the revolt that is still in the air in Chile has meant an inflection point, a point of no return in a long road of struggles, but it has also brought heavy costs with it: Hundreds and hundreds of prisoners of this territory.
Every week this number increases. In a clear phenomenon of massive arrests, the state looks to scare and criminalise social protests. We talk about political prisoners of the revolt because the massive arrests of those fighting after the explosion of the revolt on the 18th of October responds to a political decision of the state and not to technical or judiciary criteria, putting in evidence the complicities of the different powers of the state, all with the purpose of perpetuating the existing control model.

That is why we make this International call of solidarity with the prisoners of the revolt, to expose the political condition of their imprisonment and demand their immediate freedom. We extend this call and appeal to the many initiatives and solidarity actions that may appear in each territory.

International Week of Solidarity with the prisoners of the revolt in Chile: January 13th to 19th 2020

Those who forget political prisoners forget the struggle!

Immediate freedom for the prisoners of the revolt!

Terra Incognita, regarding the Eviction