‘The Animal People’ and Lessons from the SHAC 7 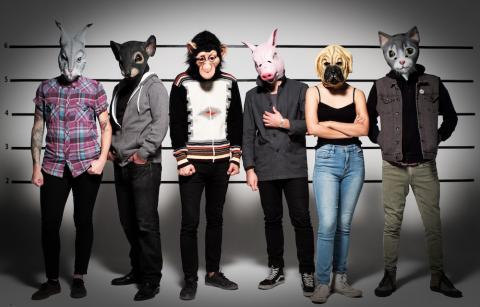 “The number of activists isn’t huge, but their impact has been incredible … There needs to be an understanding that this is a threat to all industries. The tactics could be extended to any other sectors of the economy.”

In this episode of the It’s Going Down podcast, we speak with both Josh Harper and Andy Stepanian, who both served several years in prison for being involved in the group, Stop Huntington Animal Cruelty (SHAC), which organized against Huntington Life Sciences, a lab which is paid by corporations to test products on animals.

Unrivaled by any campaign of comparable scale and effectiveness, SHAC took off quickly in the US. Thanks in part to superior funding,3 the propaganda was colorful and exciting, as were promotional videos that juxtaposed heart-wrenching clips of animal cruelty with inspiring demonstration footage to a pulse-racing soundtrack of techno music. The campaign offered participants a wide range of options, including civil disobedience, office disruptions, property destruction, call-ins, pranks, tabling, and home demonstrations. In contrast to the heyday of anti-globalization summit-hopping, targets were available all around the country, limited only by activists’ imaginations and research. The intermediate goals of forcing specific investors and business partners to disconnect from HLS were often easily accomplished, providing immediate gratification to participants.

SHAC, which served as the public face for the movement which operated in both the UK and the United States, waged an unrelenting campaign which sought to change the way in which activists targeted corporations. In the SHAC model, activists went after the shareholders and supply companies, organizing a variety of pressure campaigns and conducting demonstrations at the homes of executives. These tactics has a major impact on the company.

An anti-SHAC ad which appeared in the New York Times

In response to the campaign, the government pushed back. Targeted under the Animal Enterprise Terrorism Act (AETA), 7 SHAC organizers were eventually given several years in prison for their roles in running the SHAC website and speaking on behalf of the movement against HLS; essentially being targeted as a form of collective punishment which was intended to send a message to the wider movement.

On May 26, 2004, Lauren Gazzola, Jake Conroy, Josh Harper, Kevin Kjonaas, Andrew Stepanian, and Darius Fullmer were indicted on various federal charges for their alleged roles in the campaign. Teams of FBI agents in riot gear invaded their homes at dawn, threatening them and their pets with guns and handcuffing their relatives. The investigation leading up to the arrest was reportedly the FBI’s largest investigation of 2003; court documents confirm that wiretap intercepts in the investigation outnumbered the intercepted communications of that year’s second largest investigation 5 to 1.

The defendants were all charged with violating the Animal Enterprise Protection Act, a controversial law intended to punish anyone who disrupts a corporation that profits from animal exploitation; some were also charged with interstate stalking and other offenses. The defendants were never charged with engaging personally in any threatening acts; the government based its case on the notion that they should be held responsible for all the illegal actions taken to further the SHAC campaign, regardless of their involvement. They were found guilty on March 2, 2006, sentenced to prison terms ranging from one to six years, and ordered to pay tremendous quantities of money to HLS.

The SHAC 7 trial was clearly intended to set a precedent for targeting public organizers of campaigns that include covert action; its repercussions were felt as far away as England. In 2005, the British government passed the “Serious Organized Crime and Police Act” specifically to protect animal research organizations. On May 1, 2007, after a series of raids involving 700 police officers in England, Holland, and Belgium, 32 people linked to SHAC were arrested, including Heather Nicholson and Greg and Natasha Avery, among the founders of SHAC in Britain. In January 2009, seven of them were sentenced to prison terms between four and eleven years.

With the release of the new documentary film, The Animal People, we caught up with both Josh and Andy to talk about the SHAC 7 case, why the SHAC campaign was so successful and created a new working model for anti-capitalist organizers, and the lessons for social movements.