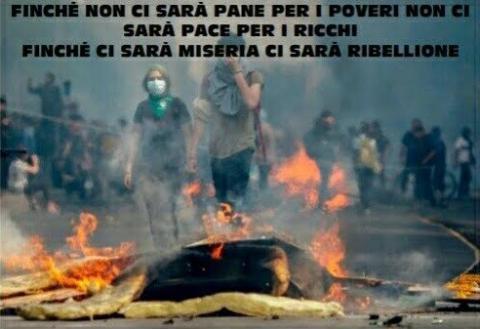 For Marcelo, with all the complicity of the fight!

I received your words of courage and solidarity that filled me with emotion and sympathy!

Today I answer (before I had censorship in the letters) to your words because I think it is important to establish ties of complicity between us anarchists around the world.

As I think it is essential to have a vision of internationalist fellowship and worthy resistance with both words and actions.

Dear comrade, today my words and my heart beat together with yours, with the struggles that have risen with courage and dignity against the Chilean government and that have been transformed from the simplicity of a struggle for the passage of the subway to set fire to and attack everything that oppresses throughout Chile. But I cannot deny that my esteem and sympathy goes to the anarchist comrades who have always been there in the street fight both day and night, in the past and in the present.

Although we are prisoners in different latitudes of the planet, I know that our struggle continues with our heads up and with dignity! That is why I send these simple words of solidarity and courage to the unruly beaten by the repression of the Chilean state; the brutality of torture, rape, murder, will not be forgotten! And the most important thing is that they haven’t stopped the fight! This demonstrates the courage of women and men who continue to fight with dignity.

We must demand the freedom of the 1700 prisoners of the Chilean revolt, without forgetting any prisoner in prisons, who, like you, comrade Marcelo, have always fought! I have no doubt that your fight is my fight! This gives me courage and I am proud to be part of this anarchist galaxy, in order to continue with the struggle until the state and its prisons will be demolished from the universe.

I also think it is essential to remember fellow revolutionaries and known or unknown rebels who have always fought in the past, in order to continue their journey today. Remember especially those who do not let themselves be overcome by times because they are not mature and continue the permanent struggle with passion and countercurrent. To all those who do not resign themselves despite the fact that all forecasts are adverse.

Remember fellow revolutionaries of the past not as icons, but as examples in practice, because they are our roots and our soul! Soul that is not abstract or religious, but a soul that is pragmatic, is a universal struggle! It is soul that tends toward revolt here and now!

For this reason I would like to remember a Chilean comrade who died here in Italy with dignity next to another comrade in the bomb blast they were preparing for Torino on August 4, 1977. This is Aldo Marín Piñones and Attilio di Napoli, died at the age of 24, militants of the armed group Azione Rivoluzionaria (anarchist / communist group). A comrade who fought against the Pinochet regime and was locked in the jails of the Chilean dictatorship and died fighting against totalitarian western democracy. We have to fight and fight …

A hug comrade Marcelo, against winds and tides