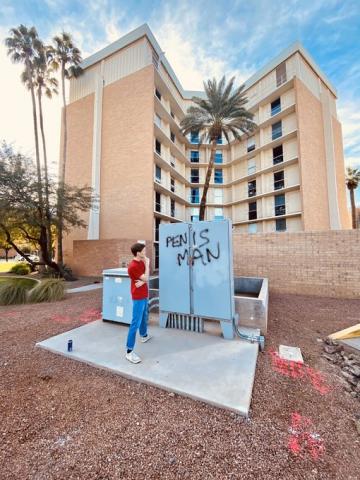 Tempe police confirmed on Saturday afternoon that they had arrested Shomer at 5:30 p.m. on Thursday.

Phoenix New Times published an article just before 5 p.m. on Thursday about the investigation, which police launched after numerous instances of a tagger scrawling “Penis Man” across public and private buildings and other objects since late November. The taggings had received nationwide attention on social media and on news sites including ABC-15 News and New Times.

As New Times reported on Thursday, the tagger had become brazen with his markings in the past couple of weeks, hitting, among other places, the historic Hayden Flour Mill and the front door of Tempe’s municipal building. Police didn’t reveal they had apprehended a suspect less than an hour after the article appeared until they were contacted by the news media on Saturday.

In a statement to the media, Tempe police said they believe he is “responsible for multiple graffiti incidents of ‘Penis Man’ throughout the City of Tempe and across Arizona State University as well.”

Shomer didn’t respond to a request for comment. But on the Unmodded – NEIGHB’rhood Group, Shomer addressed the arrest.

“I just spent the last 24 hours in Tempe and Phoenix police custody for spraying ‘Penis Man,'” Shomer wrote. “They raided my condo and vehicle and swarmed my entire complex in west Phoenix with 25 heavily armed SWAT officers, and pointed a silenced assault rifle in my face.

“Anyone with any doubt who the bad guys are here … be certain it is the City of Tempe, City of Phoenix, and police forces valleywide. There is no excuse for pointing an AR-15 in the face of a non-violent offender.”

Shomer added in further posts that he spent a night at Maricopa County’s Fourth Avenue Jail following more than five hours in Tempe police custody, during which time he was given “nothing to eat.”

He wrote that he was “told I wouldn’t receive medical attention after requesting it, even though it was posted on the wall to ask if desired. I was having a panic attack, cause they put a fucking assault rifle in my face (that’s illegal, both denying medical attn, and excessive force).”

Shomer also wrote in his post-arrest screed, “For the record, I hate the institution of the police. But, I do not think every single cop is a bastard. To say they all are, is imo, stooping to their level of profiling. Some of the detectives I met seemed to be genuine penis man fans.”

The United Kingdom’s Daily Mail, which apparently was the first to break the story of Shomer’s arrest, said that Arizona State University police allegedly caught Shomer “red-handed.” The Daily Mail noted that other posts by Shomer, a former ASU student, included the notion that he was tagging with the name as a protest against “corrupt local government.”

“Penis Man is neither man nor woman, you nor me,” Shomer wrote in one post. “We are ALL Penis Man.”