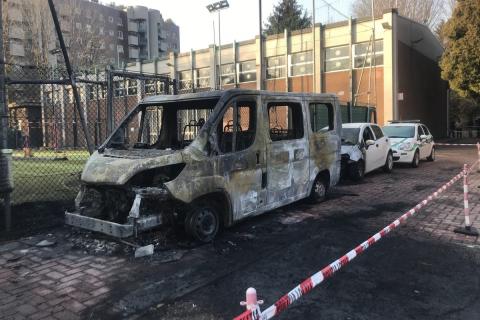 It’s time to put the romantic image of the “ghisa” directing traffic in the attic. For years now, the “localini” have had almost the same powers as the other repressive forces, patrolling the territory and making investigations and arrests.

For this reason, on the night between the 22nd and 23rd of January, we set fire to local municipality police vehicles inside their school in Milan, located in Boeri street, partially damaging some internal structures. Actions like this one show how it is still possible to attack the power, in spite of more and more advanced and numerous technological means of control and an asphyxiating patrol of the cities. Armed forces and guardians of order are not symbolic objectives, but concrete and daily builders of a deadly system based on the exploitation and systematic extermination of the last ones.

Their zealous exercise of authority consists in imposing on individuals respect for the laws desired by the powerful. This abject choice cannot remain without consequences and disturbing their tranquility is what must be done.

In acting today, our thoughts go to all the anarchist and anti-authoritarian comrades locked up in jails all over the world and to those who, pursued by the public force, have chosen and choose to go into hiding. To them goes our solidarity, but even more so our active support.

Their struggles are our struggles, their actions our actions.

For revolt and anarchy.

[Note: The local police are basically the municipal police, present in almost every Italian city and municipality. “Ghisa” (“cast iron”) and “localini” are two nicknames for local police officers in Milan. The local (or municipality) police force should not be confused with the state police (dependent on the public security department of the Ministry of the Interior) and the Carabinieri (dependent on the Ministry of Defence)].

A View on the Capitol Hill Autonomous Zone