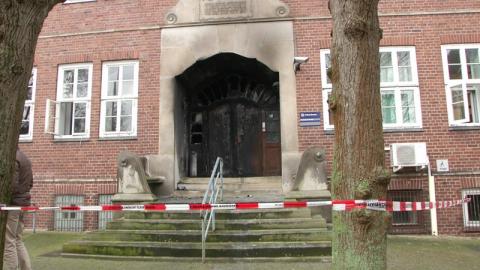 Bremen on the night of 28.01.2020, with the fire at the pig station in the Steintor quarter we are responding to the ongoing state attacks against our structures and the banning of Linksunten Indymedia. The ban will be heard at the Federal Administrative Court in Leipzig in the coming days. The result is irrelevant to us. We do not believe in the constitutional rules regarding freedom of the press and freedom of speech. We don’t make demands. During moments of fundamental social changes, the German state will always show its ugly cop face. “Attack the authoritarian state!” was the slogan at last weekend’s demonstration in Leipzig. We took note of this and acted accordingly. Because who represents the authoritarian state better than its cops? Who does every revolutionary movement face on the street?

In the fight against the authoritarian state, every success has its repercussions. At the G20 in Hamburg, thousands celebrated the riots’ moments of surprise and the occasional impotence of a gigantic pig squad. The ban on Linksunten was the direct state reaction to the political and police defeat in Hamburg’s streets. We, as revolutionary leftists, were deprived of an important structure of communication and public relations. By constructing a criminal association and then banning it, the German state has created an effective tool of repression.

In terms of content, the public prosecutor’s office justified the ban for its proximity to militant actions. It is precisely such a militant praxis that we stand up for. Consequently, our solidarity has an offensive expression: several canisters of petrol and a fuse in the entrance area of the police station in the Steintor quarter. We act in solidarity with Linksunten Indymedia and the diverse struggles for a society of freedom and solidarity!

The praxis of direct action, confrontation with the state and moments of insurgency are central to us as revolutionaries. For the German state guarantees and cements the basic ownership structure and the limits of any freedom. The overcoming of economic exploitation and the abolition of the borders that are paved with corpses will only be fought against this state and never with it. The German state is aware of this and tries to prevent and control militant rebellion. The investigative and repressive authorities are happy to use almost any means. Many activists accept offers of pacification or are intimidated. The demands for renunciations of violence lead directly into the tame protest paths of democratic movements and parties. Once radical social movements end in reformism, convenience and “participation”.

We will not leave further attacks against ourselves or our structures unanswered. Cops, get the fuck out of our neighborhoods! Or supply the fire extinguishers.

Freedom arises from a fighting movement!

(via Deutschland Indymedia, translated into English by Anarchists Worldwide)

The contagion of revolt spreads…Revolts everywhere!