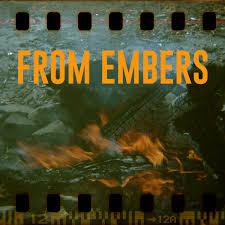 From Embers is a regular anarchist podcast produced in Kingston, Ontario. We produce a few episodes each month about actions and projects going on in so-called Canada that inspire us, or about topics that we think will be relevant to anarchists living north of the border. We are a proud member of the Channel Zero Anarchist Podcast Network.

After a break in December, we hit the ground running in 2020 and published four episodes in January.

January 9th: Nothing’s Ever Perfect/How We Live Together

A conversation with Stu, a founding member of Dragonfly Farm. Dragonfly is a rural communal land project near Bancroft, Ontario that was founded in 1978. We talk about how he and his friends got the land, how they’ve endured and navigated conflict over the years, and advice he has for folks wanting to live rurally and/or communally today.

January 16th: “Thinking Outside the Boss” with Matt Hern

Matt Hern is a long-time writer and community organizer in Vancouver. We discuss the projects and ideas he’s engaged with over the past several decades, including his upbringing and politicization, having kids and establishing alternative schools, a critical perspective on social ecology, community organizing and gentrification, and shifting focus to Surrey where he works with racialized youth to establish workers co-operatives.

Conversation with an anarchist and anti-repression organizer about how conspiracy charges have been used against anarchists in Canada and the United States, some challenges and lessons learned from supporting J20 defendants and others, the Tilted Scales Collective‘s upcoming book project, Representing Radicals: A Guide for Lawyers, and more.

An interview with John Clarke, a founder and long-time organizer with the Ontario Coalition Against Poverty in Toronto. OCAP has played a key role in the anti-poverty movement in Ontario over the past three decades, deploying a creative variety of militant and confrontational tactics in the interests of meeting the immediate needs of poor and working class people. Last year John retired as a paid organizer of OCAP, although he remains an active member. We spoke about the history and philosophy of the organization and what he believes is in store in the future for social movements in Ontario.

You can tune in to From Embers in the Kingston area on CFRC 101.9 FM between 8 and 9 PM on Wednesdays. You can also stream episodes directly at fromembers.libsyn.com or subscribe and download them via any major podcatching app on your smartphone.

If you have feedback for us, or ideas for future episodes, please get in touch! You can email us at fromembers [at] riseup [dot] net