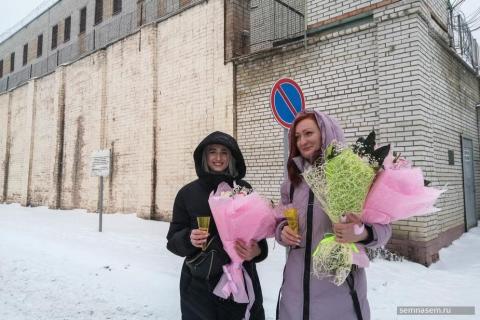 Dmitry Pchelintsev and Maxim Ivankin, two defendants in the Penza trial of the so-called Network (a terrorist organization banned in Russia)* have been married in remand prison, reports 7×7.

Registry Office workers registered Dmitry Pchelintsev’s marriage to his girlfriend, Anastasia Tymchuk, in the room on the premises of Penza Correctional Facility No. 4 where the defendants are currently held. Journalists, relatives, and friends of the couple were not allowed to attend the ceremony. Tymchuk reported that the groom made her a windcatcher as a wedding gift.

Another defendant in the case, Maxim Ivankin, registered his marriage to Anna Shalunkin at Penza Remand Prison No. 1. Ivankin had proposed to his girlfriend right in the courtroom after one of the hearings in the trial, presided over by judges from the Volga Military District Court.

“The whole procedure took two minutes,” Shalunkina said after the ceremony. “We only managed to ask each other how the other was doing. Whereas [Pchelintsev and Tymchuk] were allowed to sit next to each other and chat, here [in remand prison] there were two stools, a table, and a cage. I stood next to the table, and [Ivankin] stood in the cage. We were permitted to kiss each other only through the bars.”

Shalunkina explained that she had decided to marry Ivankin now because if he is found guilty, it is unclear where he will be taken to serve his sentence.

In August of last year, Yuli Boyarshinov, a defendant in the Petersburg portion of the Network Case, was married in remand prison. His bride wore a paper veil, and their wedding rings were fashioned from barbed wire.

A report about the weddings by 7×7

Eleven antifascists from Penza and Petersburg were arrested by the FSB several months before the 2018 presidential election. According to investigators they were planning to create armed groups in Moscow, Petersburg, Penza Region, and other Russian regions for attacking military garrisons, police officers, and United Russia party offices.

The trial in Penza against seven of the defendants—Maxim Ivankin, Vasily Kuksov, Mikhail Kulkov, Dmitry Pchelintsev, Arman Sagynbayeva, Andrei Chernov, and Ilya Shakursky—has concluded. All of them are charged with organizing [and/or] being involved in a “terrorist community.” Shakursky, Pchelintsev, and Kuksov also face charges of arms trafficking. On February 10, a panel of three judges from the Volga District Military Court will announce the verdict.

The case against Boyarshinov and Filinkov is being tried separately by the Moscow District Military Court, sitting in Petersburg.

Another defendant, Igor Shishkin, pleaded guilty and was sentenced to three and a half years in prison.

The defendants have reported that FSB officers tortured them to force confessions. In a complaint filed with the European Court of Human Rights, Filinkov said that FSB officers had beaten and electrocuted him, deprived him of food, water, and sleep, and subjected him to psychological pressure.

* Russian media are required by law to identify this perverse fiction by the FSB in this way.

Thanks to Anatrrra for the heads-up. Translated by the Russian Reader

For video, check original at https://therussianreader.com/2020/01/29/network-case-weddings/