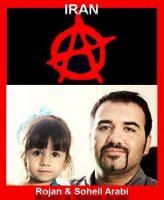 my voice even though a more a dreadful and torturous prison awaits me for the crime of wanting to be a voice for the oppressed and my fellow inmates. Yet to be human is to endure the hardship of accepting responsibility, and there is no greater responsibility for the rebel than to stand with the oppressed. I must be the voice of people like Meysam, and thus refuse to fear Two Alef, 209, One Alef, and the regime’s other horrific prisons

Meysam is an 18 year old youth from the Parand district who was arrested by agents of IRGC Tharallah military base for joining the protests against the increase in the price of gasoline that swept the country in November. Facing the charges of assembling and conspiring against the state, he is currently incarcerated in the 5th block of the Greater Tehran Central Prison. Despite his youth, Meysam’s hands are covered in callouses from being forced to be the sole breadwinner that his mother and sister depend on after losing his father to a traffic accident. He would work from dawn until midnight in the freezing cold of winter and the scorching heat of summer, delivering food on a motorcycle and pursuing his studies at night. After the sudden increase in the prices of gasoline, Meysam took to the streets to get his voice heard

He says, “Even before the price increases, I was barely able to make enough to meet my family’s most basic needs. For me and others like me, traveling and leisure have always been out of reach like a mirage, but after the price increases, I can’t even afford the cost of rent, food, healthcare, and basic utilities. Who will answer our cries of agony with help?”

Not only was there no help to be found, but his protestations were answered with blows from electric prods and batons. He was berated and tortured multiple times while his interrogator stood above him with a baton and electric prod and coerced him into confessing that he was taking orders from the United States and Israel and a member of so and so group dedicated to overthrowing the regime. Masyam asks “where the hell are America and Israel? I’ve never even traveled further than Shah Abdol-Azim’s Shrine! I just want to make enough income to live and an economy that isn’t corrupt. How does that make me an insurrectionist?”

One interrogator with threats and torture and another with false promises and lies, tell him to confess because they just want to help him. He doesn’t have anything to say and asks, “why must I confess to a crime that I haven’t committed? I don’t know anything of your politics and claims, I just know how to deliver a pizza to a customer intact. I know when they want me to deliver it to the fourth floor, and I have to accept the climb up the stairs without any complaints and hand off the food with a smile. I do this for a chance at getting tipped 200, 500, or even sometimes 1,000 tomans [relatively tiny amounts in Iranian currency], so that this year I might be able to look forward to saving up enough to throw my sister a birthday party with a modest cake. So for once, she wouldn’t have to wistfully stare at photos of her friends parties. Sir, you know, it’s my sister’s birthday at the end of the month. Please don’t let me slip further into debt. If I’m locked up in prison, who’s going pay for my mother and sister’s rent and food?”

But the interrogator doesn’t make any effort to understand him. The interrogator only cares about building a fat case file for the person he’s trying to introduce to the judicial authorities as a criminal and threat to national security. Just so he can get a big bonus for catching the dangerous criminal threat, spiteful insurrectionist, two-faced deceiver, heretic, agitator, agent of Mousad and the CIA, and a thousand other ridiculous charges

These charges against a tortured kid who has known nothing of life but work, work, and more work yet still slipping into debt, won’t stick with any glue other than that of the Tharallah military base. Humble Meysam, Milad Arsanjani, Abolfalz Karimi, and tens of other youths, who were arrested in the protests of November 2019 and languish today in the Greater Tehran Central Prison are all from impoverished territories under the governance of the Islamic Republic of Iran. Youth that in the face US sanctions and the mismanagement and corruption of the state have been denied even their most basic needs. They have every right to protest. How I wish the voices of these youth were heard and their cries for help were answered

The interrogator from 209 says writing these articles will have harsh consequences for me, and that they have far harsher prisons to send me to. I answer that their refusal to hear our voices will have perhaps even harsher consequences for them. So you locked up the Soheils, Arashes, Atenas, and Golrokhs and you’ve even gunned down the Pourias, but what will you do with the inescapable sprouts that are the Meysams and Milads out there? If you take Evin, Greater Tehran, Qarchak, Gohardasht prisons and build a thousand more, you still can’t suffocate the human yearning for justice, freedom, and equality

Instead of brutalizing oppressed people, hear their voices or face the guaranteed and immanent overthrow of your regime of tyranny and corruption. We want to build a place where we can seek justice for the crimes and atrocities committed against us. We demand justice, freedom, equality, and security. We will fight against oppression, corruption, inequality, repression, and chaos until we are victorious

They who are truly in love, no longer fear death. Lovers don’t fear incarceration and prison

A few days before being convicted, an interrogator of ward 209 said that if you continue writing articles and statements, you will face severe consequences: conviction, further restrictions, and oppressions. One of the officials, one of the prosecution officers, also implicitly said that they really hate people who don’t know their place and you should, for your daughter’s sake, hold your crimson tongue so that you get to keep your head. However, in my opinion, these wardens have taken the Papillon movie too seriously. Prison is a horrible place. And the displacement, transferring, and conviction are worse. These things make a prisoner’s torture and suffering more severe. It is true. To be even more precise, a phone call, hearing good news, sadistic smiles or vigilant frowns, a guard officer, a lawyer, the smallest details of people, and whatever that people unfamiliar with the world of prisoners consider marginal or trivial are significant and very important in our lives. But the most important thing is that prison, while bad and destructive, is not the worst. At least for a fighter, it’s not the worst place. Not only prison is not capable of destroying a fighter but also making them stronger and more determined. And an anarchist not only eradicates oppression and corruption but destroys borders and walls. Thus, the powers are real the losers and the tools they use to torture us will be the tools of their own destruction. They convicted me here with the intention of punishing me. They didn’t know that I wanted to be with these freedom-seeking youths and to share my experiences with them. I’m appreciative of this hostility led to a good cause. Long live the resistance

P.S:The possibility of joining new people and groups of anarchists will be permanent

The Union has many social media and other communication channels. You will find them at the bottom of this page

Sean Swain: How Buckingham Medical Made Me A Potential Death Statistic

Who do the passionate communards work for?