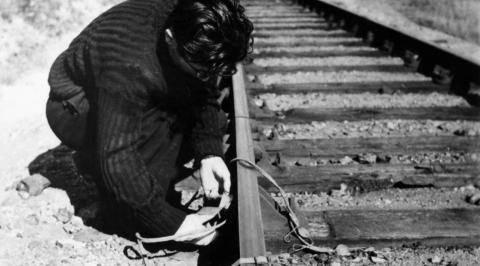 Over the past weeks since the call-out for railway disruptions appeared, there have been a half dozen actions targeting train lines in Ontario. These have been diverse, with most involving the use of copper wire to trip the sensor system. One such communique described the added impact of doing multiple, coordinated actions of this kind; another emphasized that this action can safely and easily be done alone; and another reflective one talked through some of the difficulties of preparing and making sure it’s effective, showing the potential for the action to be taken up widely. There was also a surprise demo that blocked the rails, and an incendiary attack on the power supply of a signal station.

These actions have been inspiring and are only a beginning. The raid on Wet’suwet’en territory seems inevitable, and so we would like to echo the calls that have been made to shut down Canada should the RCMP again attack land defenders there. Over the past weeks, anarchists have built up the means to do this by targeting rail lines, so we want to encourage everyone to start scouting and gathering supplies now to be ready to go in the days immediately following a raid. The disruptions that have already happened show that this strategy allows for a diversity of tactics, so there are many ways of answering this call, though the potential small, discrete groups seems particularly promising.

However, we would also like to take a moment to respond to the various call-outs that circulated on North Shore recently. They had success in inspiring action, but they made heavy use of guilt (“where have you gone, what are you doing”) and we feel the need to offer some criticisms of this in the interest of deepening the practice of anarchist solidarity.

It seems somewhat dishonest to act as though there is no reason why solidarity with the frontline struggle against CGL abruptly died off last year. It’s understandable that expressions of solidarity would change after the gate was opened certain statements that were made, since this at the very least strongly suggested the nature of the struggle there had changed. We can ask if it’s right that solidarity dropped off or if things could have been different, but we can’t act as if opening the gate changed nothing. Yes, land defenders were still on the ground, establishing new camps and continuing their resistance on the territory, but the line drawn was less clear and the communication very ambiguous. There are good reasons why people on the ground engaged the way they did, though there are similar moments in recent history where land defenders did choose a different response. This isn’t to criticize what could only have been difficult choices though, we just want to be honest about what consequences those events had for solidarity.

Solidarity is a dialogue, with action answering action, and the lack of clarity around the changed terms of the struggle contributed to a breakdown in this communication. The lack of clarity disappeared with the expulsion of CGL last month and the multiplication of calls to action. The rhythm of solidarity since has been constant. This speaks to the difference between solidarity and support – solidarity occurs in a context of dialogue through action between different groups in struggle. Those groups recognize each other as struggling towards compatible ideas of freedom and act in reference to each other so as to build a form of collective strength. Support implies a single actor and then others who are in secondary positions contributing to a struggle mostly waged by others.

As anarchists, we should to use this moment to ask ourselves questions about how we engage with distant struggles, indigenous sovereignty struggles specifically. Our antagonism to the state gives a good basis for solidarity, being in line with the critiques of Canada and of nation-states generally that have been developed in indigenous sovereignty struggles for decades. Attacking the state is always relevant, even when not done explicitly in solidarity. The federal government (and the provincial governments differently) is an occupying force and we don’t need to go to a very clear front line like Wet’suwet’en territory to be on the front line of struggle against it, since it pervades so many aspects of life. Emphasizing the struggle against local manifestations of the same forces being fought out west seems more relevant to us than either traveling there or framing our actions here as simply support. The land is beautiful there, true, but all water is connected and it’s just as deserving of protection here.

This introduces another criticism we have of the use of guilt in those calls to action, since they tried to situate the struggle in Wet’suwet’en territory as THE struggle that everyone should orient themselves around. But the struggle against domination and authority, against the state and capitalism, against Canada and its corporations, takes place in many ways in many places. This is why solidarity must be a dialogue between those with their own reason to fight – there is no need for everyone to come together around a singular goal (though converging energies can be a useful strategy), but rather to answer action with action against common enemies. Guilt, specifically white guilt, already plays too large of a role in how solidarity with indigenous sovereignty struggles a plays out – wanting similar things and acting towards compatible goals is a much better basis for solidarity and building a future.

This is why our solidarity is with the front lines, with those reclaiming free lives on territory, without any attempt to manage or mediate the struggles of others. The attempts on Wet’suwet’en territory to build practical autonomy outside the economy and free of coercive authority have inspired us for a decade. Though we live thousands of kilometers away in a very different context, we see our own desires reflected in this and have a lot to learn from their courage, strength, and generosity of spirit. Blocking a few train lines feels like a small way of answering such powerful acts, but should the raid come we intend to do it as best we can, against Canada, its economy, and the world they create. And we’re sure not to be acting alone.