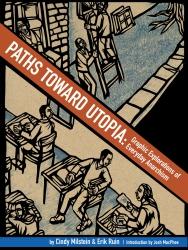 The author believes we are at a crossroads between fascism and/or extinction, and a path of communal care.

“The necessity of cooperation and solidarity is more apparent by the day.”

In this series, we ask acclaimed authors to answer five questions about their book. This week’s featured author is Cindy Milstein . Milstein is the author of Anarchism and Its Aspirations (AK Press, 2010), and has contributed essays to anthologies such as Realizing the Impossible (AK Press, 2007) and Globalize Liberation (City Lights, 2003). Her book is Paths toward Utopia: Graphic Explorations of Everyday Anarchism.

Roberto Sirvent: How can your book help BAR readers understand the current political and social climate?

Cindy Milstein: It might seem paradoxical to focus on “paths toward utopia” in what is clearly a dystopian moment in history. And rather than helping readers understand this crossroads, which to my mind is a choice between fascism and/or extinction, or instead “everyday anarchism,” Paths toward Utopia feels more like a needed reminder of our collective ethical responsibility as a species: to better care for and love each other, and the nonhuman world, in the here and now of whatever time we have left. Or as I wrote in the prologue to the book, it’s a reminder that we’re “balanced on the tightrope between the tension that marks any inching toward utopia, and that especially today, is stretched taut by the push-pull of utter despair and utter hopefulness.” Yet as social anarchist Peter Kropotkin wrote long ago in his book Mutual Aid, species not only survive but also thrive best when they mutually support each other. Poignantly, the necessity of cooperation and solidarity is more apparent by the day.

“Many of us are already nurturing a climate of communal care.”

So this book of picture-essays — with Erik Ruin’s art and my words themselves engaging in mutual aid to create a wholeness — asserts that despite the structural violence swirling around us, “the impossible is indeed possible,” to quote from the Zapatistas on their twenty-fifth anniversary in January 2019. And those possibilities are already here, as seeds within the common sense of our daily practices, whether we’re self-determining and self-governing in an autonomous community such as in Chiapas, Mexico, or prefiguring liberatory forms of social relations and social organization in smaller ways. The current climate isn’t just one of climate catastrophe; side by side, many of us are already nurturing a climate of communal care. The book aspires to move a bit of soil out of the way so readers can see those seeds unfolding, and I trust, encourages people to co-cultivate lives worth living, in common with other humble, dignified humans.

What do you hope activists and community organizers will take away from reading your book?

I hope, first, that people will think of themselves not as “activists,” which to me has a reactive and often “ambulance-chasing” quality, and instead recognize that they and the communities within which they’re embedded are already proactively experimenting with — collectively “self-organizing” — bits and pieces of a new world. Utopian thinking is, to again quote from my book’s prologue, about finding “cracks that we can further pry open in what seems like the smooth surface of social control.” We stop “seeing like the state” and thus always reacting to its logic, and instead look through “anarchist glasses” so as to truly see and better exercise our nonhierarchical practices, to borrow notions from anarchist anthropologist James C. Scott. Yet it’s not just about seeing in a new way, although that’s critical; it’s to also know that we can and already are doing some of what we’d like to do as the everyday of our lives.

My hope is especially that readers follow the thread of “commons” in the book and weave it into their organizing and projects, communities and hearts. Phrases such as “water is life,” emerging out of people reclaiming their relation to the ecosystem and each other while simultaneously contesting the enclosures, privatizations, and commodification of inherently violent systems like colonialism and capitalism, get at this. Water is not only the basis of life — human and nonhuman — but also something that must be held in common, so as to be used, shared, and enjoyed freely by all. And to hold something in common so that it can be used, shared, and enjoyed by all — things people need like libraries, parks, homes, health care, art, and more — means taking coequal responsibility over sustaining that commons. As such, a commons is inherently something that we all need to self-manage and self-govern together. A “commons of care,” versus the hierarchical social system we live under, is a dramatically different way of seeing and, more important, engaging in our world, as the basis to substantively transform it.

We know readers will learn a lot from your book, but what do you hope readers will un-learn? In other words, is there a particular ideology you’re hoping to dismantle?

We all need to un-learn so much if we’re to journey on paths toward utopia. Or rather, that is part of the journey! We need to un-learn how we think (such as in binary, noncritical, or unimaginative ways), how we act (say, obediently, individualistically, or domineeringly), how we feel (such as unemotional or without empathy), and so much more. The current social structures in their myriad laundry-list of destructive forms “teach” us from day one, or even in the womb, how to, as I’m fond of saying, “fall in line, not in love.” I’m not talking about a heteropatriarchal love, or the hyperromanticized or hypersexualized version of love inculcated via contemporary culture. Those are part of teaching us to go along with the world “as it is.” I’m speaking of an abundant, expansive, generous, multifaceted love, as part and parcel of this journey toward a caring commons. A love that teaches us “what could be,” because we are lovingly prefiguring an ecological and free society.

“The current social structures ‘teach’ us how to ‘fall in line, not in love.’”

In terms of a particularly pesky ideology in the Turtle Island context, I would say (neo)liberalism. It would be marvelous if this book sheds some light, implicitly, on how it keeps people in line. I’m continually amazed — and saddened as well as enraged — that people can proudly hold up a “Black Lives Matter” sign at a demonstration against killer cops, yet, for example, point out a young black man who may have helped tear down a Confederate monument to the cops, urging his arrest. Liberalism teaches that property not only has rights but property is also sacrosanct — more so than people’s lives. It teaches far more, of course, such as an individualist ethos, which is one of the biggest roadblocks to organizing toward collective freedom. It instills the notion that the state, along with its cops, courts, prisons, and military, will protect us, even as the state is plainly surveilling, repressing, imprisoning, and murdering — in broad daylight, often captured on YouTube — to protect top-down structures. This is too big a topic for here, but suffice it to say, liberals, more than others, tend to defend the status quo, and think that the status quo’s institutions will save us. So I hope this book contributes a little toward shaking up people’s belief in (neo)liberalism by nudging them to recognize only we can save each other.

Who are the intellectual heroes that inspire your work?

This is a tough question for me. I don’t have heroes, and am not sure anyone should have them. “Heroes,” especially in the context of the present-day dominant structures, are usually those with tremendous power over others, whether politically, socially, or culturally. We’re supposed to “look up” to them, rather than us recognizing that we can and should all be able to think critically and imaginatively in ways that challenge as well as inspire each other. Everyone can be a philosopher, asking and answering together, continually, What is the good society? Hero “worship” hands that and other essential questions over to people who put on a pedestal, as if they are gods or perfect, erasing the messy-beauty of people, ideas, and social transformation. It erases how knowledges are always co-created over time, and should always be dynamic, open to being debated, rethought, renewed.

In what way does your book help us imagine new worlds?

I’m not convinced that we can truly imagine new worlds until we’re living within them, and for a sustained amount of time, especially given how circumscribed our imaginations are within this current world, and how much we’re socialized to, say, “see like capitalism” or “see like white supremacy.” But I do know that we can gesture at what it begins to feel like to be outside this damaged world, and the deeper and more long-lasting those gestures are, the more our imaginations about what’s possible will expand. I often use this example, but it still resonates so powerful with me as a lesson in “anarchism” or “utopia” in action. When I was part of creating along with about thousand other people, literally overnight, a bottom-up city within a top-down city during Occupy in 2011–12, I kept hearing people there proclaim, “I’ve never felt so alive!” That is a gesture so profound that, to my mind, it lingers as a hunger, a longing, in people, “even when presidents & property, police & prisons, crushingly return,” as I wrote in one Paths toward Utopia picture-essay.

So each of the picture-essays in this book, and my words in the prologue, are meant to spotlight such gestures in the here and now as stepping-stones on a journey that’s fraught with pitfalls and potentialities both. It’s critical to imagine that we not only can “imagine new worlds” but also remember — or see — that we’re in process of creating and doing those new worlds, within the cracks and shadows of this horrific one. Indeed, my imagined new worlds are always about processes and a myriad of messy-marvelous experiments, not some fixed, final, allegedly perfected utopia — an unrealizable notion that gives “utopia” a bad name. I keep quoting from the book, but I’m proud of its words, its sensibility, especially in these increasingly zombie-apocalypse times: “The precarious passage itself is our road map to a liberatory society.”

Roberto Sirvent is Professor of Political and Social Ethics at Hope International University in Fullerton, CA. He also serves as the Outreach and Mentoring Coordinator for the Political Theology Network . He is co-author, with fellow BAR contributor Danny Haiphong, of the new book, American Exceptionalism and American Innocence: A People’s History of Fake News—From the Revolutionary War to the War on Terror.