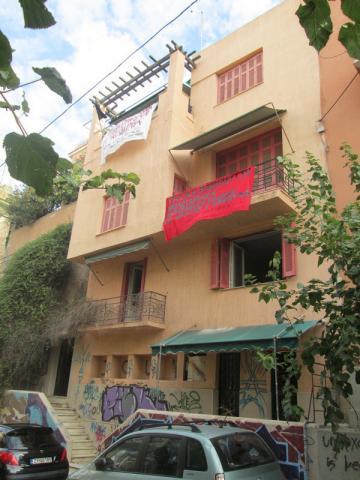 On February 2nd we took the initiative to burglarize our own house. Gare in Athens is not just for its own members, it belongs to the entire movement. We hung a banner in solidarity with the free spaces and in solidarity with D. of Gare banner saying “Power to the wanted Comrade D. Chatsivachiliadi, Solidarity to the Squats, The State is the Only Terrorist”. We do this action in solidarity and also as an act of resistance: our way of fiercely protecting our ideas, our lives, our spaces, our houses, and our futures.

On August 26th Gare was evicted for the second time in two years and bricked up. It was one of the first in a new wave of repression against the free spaces. Gare was one of the first targeted because the job of the state is to smash the most radical parts of the movement in order to clear the way for further repression and pacification. The state is trying through law and police oppression to put a straight jacket on the furious body of the oppressed peoples. In October, after a robbery action which led to the finding of a weapons cache, including the weapons of Revolutionary Self-Defense. D. was forced on the run and made a fugitive by the state.

“It is exclusively I who took the decision and the practical responsibility to keep these objects, knowing what I had in my possession. It was a personal political decision for the safekeeping of the history of social resistance and the contribution to the needs of defense of the social struggles whenever that would become necessary and feasible, in the midst of the raw murderous attack that is endlessly inflicted on the exploited, the excluded and the movements.”

He is in this situation because the state is in the process of criminalizing the anarchist movement. They treated his positioning as a terrorist one because this is the only way they can publicly acknowledge the combative political struggle and thus depoliticize it. They then used this designation to target anyone in the movement who might have had ties to him, spreading further fear of association. This is part of their way of forcefully separating the militant and combative parts of the anarchist movement from the broader struggle.

This criminalization doesn’t just apply to this case it is also being applied to all free spaces. In this way the state reveals its true face as the real terrorist. It brings terror to all those who struggle for freedom and all those who might resist its tyranny. In this way it builds a social climate of fear and silence. The state is also targeting the squats because they put into question the authority of private property which is the foundation of capitalism. This climate of fear the state is imposing is also an attempt to isolate those unassimilable and resisting people from the broader society: to quarantine them in the ghettos of criminality and prepare for their imprisonment.

State media is also trying to portray D. as a leader of the anarchist movement. This is part of the state’s attempt to incorporate and make understandable the anarchist movement in the state’s own language: through privatization and individualization. Civilization, capitalism, and patriarchy pretend that history is made by “great men.” We know that history is made by people working together collectively, people whose names will most likely never appear in the lines of a history book. We use horizontal structures because we understand this fact, and organize accordingly.In putting people into the position of fugitives, in attempting to impose isolation, the state pursues their plan of separating those who fight combatively from the rest of the movement, and thus in working together in the struggle against the system. This is their way of defanging our struggle.

As a movement we must attack with full force this attempted isolation. Our strongest weapons are solidarity. We cannot succumb to the fear of association which is part of the states attempt to separate the anarchist movement from its radical wing.In our action we are breaking this isolation and silence. We are declaring our solidarity and support publicly for the wanted comrade. We will fight and resist state terrorism and repression. We will not allow the state to marginalize us and pretend we are separated from the social body. We will not go into the dark silently. We refuse victimhood and propose attack.

We are the thorns on the rose of freedom! We will make you bleed every time you to try cut down life with your cages and mercenaries.

NOTHING IS FINISHED, EVERYTHING IS STARTING.