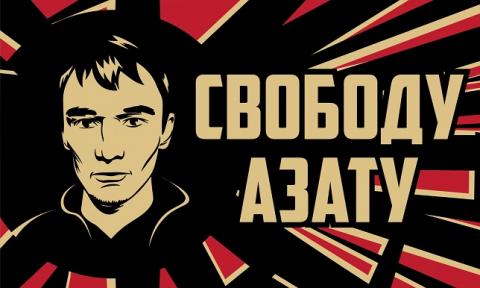 Moscow City Court has extended the term in custody of mathematician Azat Miftakhov, charged with disorderly conduct, as reported in Novaya Gazeta‘s live blog from the hearing.

Since Miftakhov has been in remand prison for a year, further extensions of his remand in custody had to be decided in the city court rather than in a municipal district court.

According to the Telegram channel Vestnik Buri Originals, Svetlana Sidorkina, Miftakhov’s defense attorney, reported that before court hearings her client was not delivered directly from the remand prison to the court by the Federal Penitentiary Service, but for unknown reasons was driven around town in a paddy wagon.

The defense asked the court either to transfer the mathematician to house arrest or release him on bail in the amount of 1,994,000 rubles [approx. 28,500 euros], but the court sided with the prosecution and extended Maftakhov’s term in custody till April 7.

Miftakhov, a graduate student in mathematics at Moscow State University and an anarchist, was arrested as part of an investigation of a case of group disorderly conduct, as punishable under Article 213.2 of the Russian Criminal Code. Police investigators allege that on January 30, 2018, Miftakhov, Andrei Yeikin, Yelena Gorban, Alexei Kobaidze, and Svyatoslav Rechkalov broke a window in a United Russia party office and threw a smoke grenade through it. Rechkalov and Kobaidze have fled Russia, and their case is now being investigated separately. In December 2019, the Russian Interior Ministry reported that it had completed its investigation of the case of the broken window at the United Russia party office.

Miftakhov was detained on February 1, 2019. He would later tell his lawyer that he had been tortured with a screwdriver. For the next eleven days, his arrest was extended under various pretexts. OVD Info has written in detail about different aspects of Miftakhov’s arrest and published a timeline of developments in the broken window case.

(via The Russian Reader)

In the Autonomous Zones