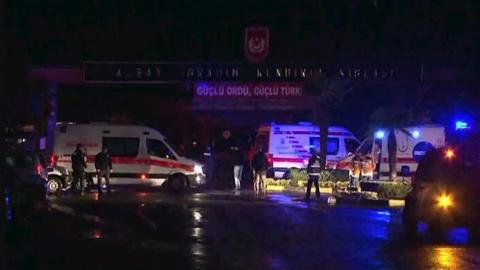 09.02.2020: The Kurdish-Turkish urban guerrilla alliance “Peoples’ United Revolutionary Movement” (Halkların Birleşik Devrim Hareketi, HBDH) has claimed responsibility for an action that targeted a military barracks in Istanbul. The retaliatory action against the “Albay İbrahim Kendirli” barracks in Tuzla (a municipality in Istanbul) was carried out by the “Şehîd Çiyager Vengeance Unit” on Friday evening. Several explosions ripped through the barracks, which then caught fire. The Turkish state, following their usual protocol regarding attacks of this nature, reported the attack as a ‘small fire of unknown origin’ and have released no information regarding injuries or deaths. Going by the number of ambulances sent to the barracks following the attack, it seems almost certain that casualties were incurred by the Turkish military. The following is an English-language translation of the claim of responsibility released by HBDH…

Our forces demonstrated that the fascist enemies were not safe even in their barracks, protected by thousands of weapons, armor, and other preventative measures, from the action that we carried out for the Cizre Massacre. The massacres in Cizre are carried on by AKP/MHP fascism today. AKP/MHP fascism attacks with the most brutal methods against all oppressed peoples, especially the Kurdish people, with exploitation, occupation and war. The only aim of this fascist war carried out by Erdoğan is the survival of his own power. Erdoğan’s fascism is the power of persecution. Erdoğan and his collaborators will pay the price for this persecution.

Those who murdered dozens of people in Cizre, those who brutally attacked people in the basements, kept the bodies in their refrigerators for days, and tortured people in the streets will continue to hear this explosion. Those who murder the peoples, women, insurgents and destroy the cities with bombs should know that they will continue to be targeted by our units. Even the murderers who tortured people in Cizre should know this: our forces will call you to account for the massacres you have committed against the people; your palaces, barracks and police stations will not protect you! Your safest places and your fascist castles will not protect you from the Peoples’ United Revolutionary Movement!

As HBDH, as long as the persecution continues, we will continue to call the enemy to account until victory. We will destroy the massacre reign of fascism!

Note from Anarchists Worldwide: For readers unfamiliar with the events referred to as the Cizre Massacre, you can read about it here, here and here.