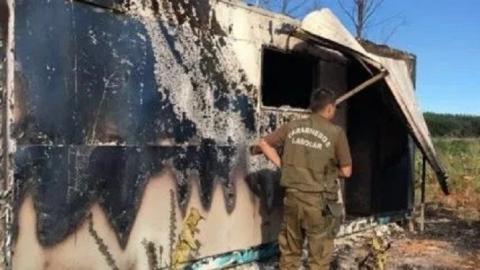 The sweet night and the complicit fire are our best allies. We’ve had enough – long ago – of harmless cackling. We are dangerous, and we are everywhere. The time to attack is now or never, compañerxs…$hile falls to pieces which makes us happy; and encourages us to extend the conflict on the other side of the mountain range. Decisiveness, courage and diverse forms of direct action are urgently needed. Let us not hesitate and join in their heroic struggles now.

In the territory that the rotten Arjunian state is trying to control (without success…), after innumerable vendetta actions, because of the cowardly murder of our compx Santiago Maldonado, things seem to have “calmed down”, for a while. Let’s break the supposed truce; and continue making our dreams of total liberation the worst nightmare of power: of this new pseudo-progressive government, we only want to see a mountain of ashes!

In the early morning of January 26th, in a small summer town in the province of Malos Aires, two containers began spewing forth a thick column of smoke, and immediately the flames rose uncontrollably from inside. We stopped nearby to enjoy the combustion. A patrol came quickly, cordoning off the area, but it was too late, we left the place satisfied and with beating hearts.

We did it to commemorate 100 DAYS of uninterrupted, wild and uncontrolled anarchic revolt by our compxs from over there, loving and insurrectionary hugs @ all of them! An inexpressible rage is what we feel for so many dead, imprisoned, mutilated, raped and persecuted. But nothing has ended as long as the sun of the Acracia shines on our breasts; and we sharpen the fury, destructive, of anything that tries to keep us slaves.

Let this 2020 mark a point of NO RETURN in the World Social War. Let’s multiply the anti-authoritarian offensive wherever we are; with the conviction that we are not alone, nor will they be able to catch us (easily), if we consciously organize every single gesture of struggle…Let every cell be present in its zone sending out the alert and ending the police’s fictitious fucking “peace”. This doesn’t stop. Freedom or death: we go for everything.

THEY WANTED TO SEE US FEARSOME: WE ARE WORSE!

Greece: Gare squatters say ‘The best days have yet to come’