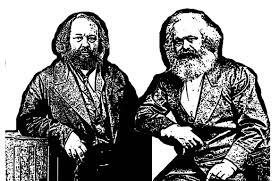 **Many people regard anarchism and socialism as contradictory programs. This is based on the conception of “socialism” as state ownership of the economy. Yet historically, anarchists have regarded this program as “state socialism” or “authoritarian socialism.” They have rejected such views in favor of “anarchist-socialism” or “libertarian socialism.” This concept of anarchism as a variety of socialism remains important today in opposition to pro-capitalist “libertarianism” and to “democratic socialism”–that is, reformist state socialism.**

Many U.S. anarchists, or radicals interested in anarchism, are surprised to hear of “anarchism” as being “socialist.” Like most U.S. people they have learned to think of “socialism” as meaning state-owned industry—which would be the opposite of anarchism. (Similarly “communism” is usually thought of as Stalinist totalitarianism.) Also “the Left” is often interpreted as support for such state-oriented economic programs. This was the view of socialism propagated by the U.S. ruling class as well as by its opponents in the Soviet Union and similar states.

And yet, what sort of economy have anarchists advocated? They are anti-capitalist and want to take away the wealth and power of the capitalist elite. They want to replace private ownership of the means of production with collectivized, social, ownership—to replace economic competition with cooperation—production for profit with production for use—division into classes with a classless society, with no rich or poor, no specialized order-givers ruling over specialized order-takers. A chaotic, competitive, system would be replaced with overall democratic coordination (planning) from below. All of which is entirely consistent with the rest of the anarchist program of abolishing the state and all other forms of oppression: racial, national, gender, sexual orientation, and so on. What is this proposed non-profit, cooperative, economy but socialism?

In fact, virtually all anarchists, from the beginning, have called themselves “socialists” (and some have also called themselves “communists”). At the same time, they have always regarded themselves as “libertarian socialists” or “anarchist-socialists,” to the left of—and in opposition to—the “authoritarian socialists” or “state socialists.” Well before the Russian Revolution, they argued that—whatever the subjective desires of the state socialists—in practice that program would only create a form of state capitalism (with the state bureaucracy acting as the new, exploitative, capitalist class).

The first person to identify himself as an “anarchist” was Pierre-Joseph Proudhon. Proudhon usually “described himself as a socialist….Although he criticized both centralized democracy and state socialism, he still considered himself a democrat and socialist….Like Bakunin and Kropotkin, he argued against state socialism and called for a decentralized, self-managed, federal, bottom-up, socialism: anarchism.” (McKay 2011; 23)

In his 1910 entry on “Anarchism,” written for the Encyclopedia Britannica,, Peter Kropotkin wrote, “As to their economical conceptions, the anarchists, in common with all socialists, of whom they constitute the left wing…consider the wage system and capitalist production altogether as an obstacle to progress….The anarchists combat with the same energy, the State, as the main support of that system….To hand over to the state all the main sources of economical life…would mean to create a new instrument of tyranny. State capitalism would only increase the powers of bureaucracy and capitalism.” (Kropotkin 2014; 164-5; my emphasis)

The great Italian anarchist Errico Malatesta was a younger comrade of Bakunin’s and Kropotkin’s. In 1897 he wrote, arguing against the “democratic socialists,” ”From 1871, when we began our propaganda in Italy, we have always been and have always called ourselves, socialist-anarchists….We have always been of the opinion that socialism and anarchy are two words which basically have the same meaning, since it is impossible to have economic emancipation (abolition of property) without political emancipation (abolition of government) and vice versa.” (in Richards 1984; 143; emphasis in original)

Malatesta had supported Kropotkin’s “anarchist-communist” version of anarchist-socialism, but he stopped using the “communist” label after the Russian Revolution. He still identified with that tradition and with the end-goal of a libertarian communist society. But he felt that the Leninists had given the term “communism” an authoritarian reputation. Instead, Malatesta referred to himself as a “revolutionary anarchist-socialist.”

Noam Chomsky cites the views of the anarcho-syndicalist Rudolf Rocker as indicating, “anarchism may be regarded as the libertarian wing of socialism.” (Chomsky 1970; xii) Chomsky further quotes one of the U.S. Haymarket Martyrs, Adolph Fischer: “Every anarchist is a socialist, but not every socialist is necessarily an anarchist.” (xii)

So, by theory and by history, mainstream anarchism is a wing of the socialist tradition. Some of today’s anarchists attack “socialism” and “the Left” for things—statism, authoritarianism, reformism, misuse of technology, sexism—which the classical anarchists had long since denounced. Yet the earlier anarchists were clear that they were not condemning “socialism” but “state socialism.” They regarded themselves as being far to the left of the authoritarian Left. Therefore they had seen no need to reject “socialism” as such.

This argument may seem abstract and archaic, but there are also current reasons for U.S. anarchists to keep the term “socialist.” One reason is the growth of a “libertarian” pro-capitalist movement. Anarchists need to distinguish themselves from this trend which is relatively influential. It draws on some of the same motives that attract people to anarchism—opposition to drug laws, to gun suppression, to sex laws, and to other forms of state oppression. When anarchists speak about their views, they are often accused by Leftists of sounding like these pseudo-libertarians. Unfortunately, these right-wingers use the same label of “libertarian” which anarchists have used since the 19th century.

These “libertarians” range in views from Trump-supporting Republicans to the Libertarian Party to some who regard themselves as anarchists. As free-market absolutists, they oppose laws which protect public health or worker safety. Some are for a “minimal state,” while others call themselves “anarcho-capitalists” (which is not a thing). These latter are against the bureaucratic-centralized state but do not object to bureaucratic-centralized corporate monopolies. They would replace the state with private armies of “rent-a-cops” hired by the wealthy—which would, in effect, become the new state.

These pseudo-libertarians claim to be in the tradition of “individualist anarchism.” This tradition is somewhat distinct from the mainstream of revolutionary anarchism from Proudhon, Bakunin, and Kropotkin onward. Many anarchists (such as Emma Goldman or Daniel Guerin) have sought to integrate the insights of individualist anarchism with socialist anarchism. In any case, the individualist anarchists were never supporters of capitalism and sometimes called themselves “socialists”. One of their founders, Benjamin Tucker, wrote in 1893 of “the two principles…Authority and Liberty” as the basis of “the two schools of Socialistic thought…respectively, State Socialism and Anarchism.” (Krimerman & Perry 1966; 62)

Iain McKay argues, “Anarchism has always been a socialist theory and the concept of an ‘anarchism’ which supported the economic system anarchism was born opposing is nonsense.” (McKay 2008; 7; emphasis in original) So it is important for anarchists to identify as ”libertarian socialists” and “anarchist-socialists” in order to distinguish themselves from these phony, “libertarian,” supporters of exploitation and oppression.

Another current trend to which anarchists must relate is the rise of “democratic socialism” (or “social democracy”). Due to various factors, including the obvious failures of capitalism, a large minority has become attracted to this sort of “socialism.” A review of political polling over the last decade reveals, pretty consistently, that a sizable number (between 30 to 40 percent) favors “socialism.” While this is only a minority, it is about the same proportion of the population as that which supports President Trump! Importantly, young adults are most likely to have a positive view of socialism and a negative view of capitalism—from 40 to 50 percent. (Polling is summarized in Price 2018.) This is reflected in the significant position in the Democratic presidential primaries held by Bernie Sanders, despite his self-identification as a “democratic socialist.” It is also reflected in the rapid growth of the Democratic Socialists of America (DSA) to around 60,000.

What people mean by “socialism” or “democratic socialism” is very uncertain. (Sanders himself does not advocate expropriating the ruling rich, nor socializing major sectors of industry; his model, he says, is the Nordic countries, such as Denmark, which are capitalist countries with major welfare benefits—benefits which are now under attack.) The DSA itself is “multi-tendency.” It even has a Libertarian Socialist Caucus. But its predominant tendency involves using the electoral system of the capitalist state–by “democratic” they mean working within the electoral system of capitalist representative (limited) democracy. For most of them this means participating in the Democratic Party (right now supporting Sanders and some others, such as Alexandria Ocasio-Cortez). This is in order to propose reforms which supposedly may lead to a socialist society. That is, they are reformist state socialists. Some of them regard themselves as “revolutionaries,” but they do not openly advocate overthrowing the existing state.

Not that “democratic socialists” openly propose a completely centralized, state-managed, economy. This is no longer possible even on the Left. They are also for workers’ management, consumer cooperatives, and local, municipally-owned, industry. Anarchist-socialists also include such concepts within their overall program of a self-managed economy—a program which can only be achieved through the overturn of the state. But for these “democratic socialists,” such ideas go together with nationalized industry and reforms enforced by the existing (capitalist) state. (See their proposals for a “Green New Deal”; Price 2019.)

Revolutionary anarchist-socialists should have a two-sided approach to this growth of interest in socialism. On the one hand, they should welcome the new, popular, hostility to capitalism and openness to alternate systems, summarized as “socialism.” This is not the time for anarchists to be rejecting “socialism.” Anarchists, too, are part of the socialist movement and have always been.

On the other hand, they must oppose all varieties of state socialism, both reformist (working through the existing state) and “revolutionary” (seeking to overturn this state and to set up a new state—the “dictatorship of the proletariat” or whatever). Anarchists are the authentic socialists, they must say. Reformist state socialists will only maintain the existing capitalist system—a system in crisis which can no longer provide significant reforms. Alternately, revolutionary state socialists (Marxist-Leninists) would, if successful, only create a new system of state capitalism.

The radical movement of the “sixties,” also began with a reformist program. The Students for a Democratic Society, the then-dominant organization, began as the youth group of the League for Industrial Democracy. This was a social democratic body which included Michael Harrington (who later started DSA). It was only over time that the youthful Left developed in a revolutionary direction—although one which was dominated by Leninist statism.

The pattern of movement from reformism to revolutionary socialism is likely to be repeated–this time hopefully toward libertarian socialism. The ongoing crises of U.S. and world capitalism will push the current radicalization further to the Left. The reformists will be unable to offer real solutions to the disasters which are looming over society. I am not proposing specific tactical directions (should anarchists join the DSA while opposing its electoralism and statism, or build independent organizations?). But revolutionary anarchist-socialists should be preparing for future developments by organizing themselves now.