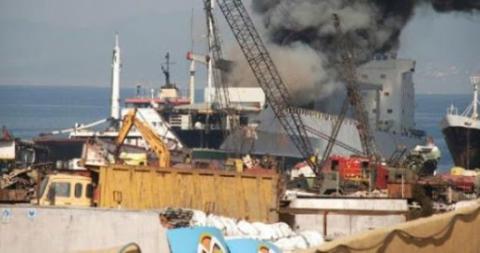 The Children of Fire Initiative have announced that they set fire to a ship in Tuzla, a bus in Umraniye and a factory in Adana.

WE ANSWER THEM IN THE ONLY LANGUAGE THEY UNDERSTAND

The Initiative stated: “We will continue to respond to the barbaric enemy who carried out massacres in Kurdistan in the only language that they understand. The enemies of the Kurds applauded while the massacres were taking place in Serêkaniyê and Afrin, but they ask for help from the state with tears in their eyes when a car is set on fire in Turkey.” The Action Report from the Children of Fire Initiative is as follows:

We have already stated that everybody who supports the massacre of the Kurdish people will be our targets no matter where they are. The enemies of the Kurds applauded when the massacres were carried out in Serêkaniyê and Afrin, but now they are crying for help from the State. They should know that we are coming for them too. The Children of Fire Initiative will continue targeting the enemies of the Kurds in all areas, we will continue to take revenge and call them to account.

Actions of the Initiative are as follows:

On the 18th of February, at 11:30PM, our initiative set fire to a driving school bus in Umraniye, Istanbul. The torched bus is now unusable.

On February 16th, our initiative set fire to a cargo ship in Tuzla, Istanbul. The ship is now unusable.

On February 13th, our initiative set fire to a cotton factory in Adana’s Yüreğir Havutlu District. The fire, which hundreds of personnel tried to put out, burned for 3 days.