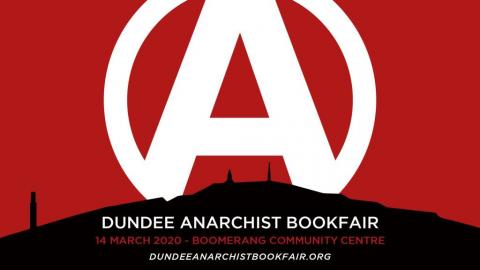 With the recent announcements of dates for Liverpool and the Anti-University, our list of anarchist and radical bookfairs across Britain and Ireland is getting pretty full of events – including Bookfair 2020, the first anarchist showing of its kind in London for three years.

It’s looking like a good crop this year with Dundee offering a whole new event while the London Radical Bookfair makes a return following its 2019 hiatus. We’ve also included in this edition a couple of other notable events which are not technically bookfairs, but fit the general theme!

Most of the regular showings are now declared (impressively well ahead of time in most cases), but we’ll keep updating as we go.

The first event of its kind in recent memory, the Dundee bookfair looks like it’ll be well organised, putting on free childcare, free lunch from 12-2pm from Food Not Bombs Dundee and hot drinks all day for donations. The organisers note: “We’re going to showcase some of the amazing groups doing work in Dundee and have a selection of independent vendors selling literature and zines.

“In the short term, we’re actively trying to connect local activists and groups so we can platform them as best we can with the hope that we’ll be able to help them grow and share lessons learned. Our long term aim is to establish an autonomous space in Dundee and we see this event as a vital part of that process. “

At The Black-E, 1 Great George Street

The Anarchist Festival: May 1st-4th

The idea is simple: groups or individuals put on their own anarchist events and actions, the programme is then collated and promoted on anarchist websites and social media. Last year was a success story with events across the country.

DEADLINE ALERT! Please be sure to submit your event by 1st April 2020 for inclusion in the programme. Any event submitted later than this date will not be included.

With a good number of stalls already confirmed, a fantastic space at the Start and Shadow, and a set of interesting-looking workshops this year’s event, named in honour of the much loved Ewan Brown, is a must-see.

In year three and still going strong, the Edinburgh bookfair is busy putting together its content at the moment, and has put out calls for talks on a wide range of topics including fatphobia and the Scottish Witch Trials.

Various times and places, check out their website for details.

Hosting its sixth festival of radical, decentralised and non-institutional education, anti-uni has just announced its formal schedule for this year.

Back after a break last year, there will be over 130 exhibitors this time round including only booksellers but also radical publishers, zine makers, artists and activists. Organised by the Alliance of Radical Booksellers (ARB).

Dorchester managed a pretty reasonable showing last year despite unfortunate clashes with the Bradford Bookfair and the Dorset County Show, but will hopefully have the day more to itself this year. With stalls, talks, food, a dedicated kids area and lovely people, it’s worth a trip.

Bradford’s long-running anarchist hub does it for the third time running. Organiser Rebel Cat notes: “This year we are doing the stalls between 11.30 and 4.30pm with talks, poetry/performance art as well. This will be followed by an evening of Anarchist Games between 5pm and 7,15pm and finally to wrap the evening off we will have a DJ Request Show with snacks and chat with more informal games (bring along what you want to play)!”

A smaller affair than the pre-2017 London Bookfairs, but already pulling in some excellent speakers and with most of the major publishers on board, it’ll be an entertaining ride.

Run by Five Leaves Bookshop, with lots of supporting events throughout the day, more details TBA.

Bristol (Anarchist): “Will either be late this year or into 2020” according to organisers. Facebook

The surprising history of anarchists in Ontario

“The Greatest Purveyor of Violence”: Black Rose Statement on U.S. Aggression Against Iran