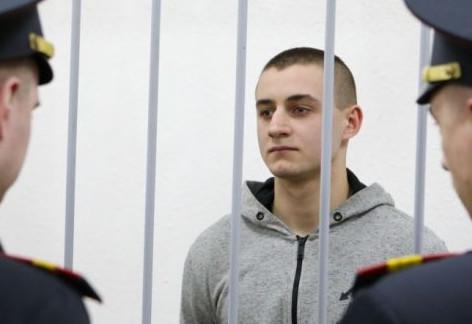 Yemelyanov studied at the Belarus National Technical University in the 3rd year, worked as a courier after study. He was detained on October 20, 2019, together with an accomplice on suspicion of an attempt to set fire to Minsk remand prison- SIZO1. The action was held in solidarity with political prisoners. He was convicted by judge Alexander Yakunchikhin for 7 years in a reinforced regime colony.

Yemelyanov came to anarchism gradually, having evolved from a social democrat with a brief stop on the left-leaning nationalist ideas. He was an administrator of the”Chorny Supracivus” telegram channel.

“I didn’t want to communicate with leaders, I wanted to be autonomous”.

Realizing himself as an anarchist, Nikita made a wise decision not to join the existing organizations. Anarchist groups, which are under massive police surveillance, can only teach you intriguery and how not to go beyond the limits established by the system, thus turning the anarchist struggle into a farce. Instead of simulating activity, Nikita chose the path of direct attacks against the state.

Carrying out a fiery attack on the prison and having successfully escaped, the comrade came across the arrived patrol of the Department of Security and was detained along with an accomplice.

“The patrol saw two young men standing at a traffic light. The officers approached them and asked them to show their documents and backpacks. They looked like the men from the orientation, further suspicion was that they were dressed quite lightly, not by the weather. They had hoodies and windbreakers in their backpacks, one of them smelled of chemicals.” (from the cops’ testimony)

Unfortunately, mistakes were made that drew the patrol’s attention. Atypical for the season clothes, spilled gasoline in the backpack, standing at a traffic light in a visible place … Being detained, Nikita behaved steadfastly, refused to unlock the phone and give evidence.

Subsequent searches and computer forensics gave no results. The preparation for the action had been done in good faith, the compromising materials and information from the bearers had been cleaned up in advance. No combustible substances were found on the clothes or nail cuts. The exit route was drawn up by video cameras of different shops, from the place of residence to other parts of the city, but the participants of the action were not exposed on them.

Having no direct evidence, the cops resorted to their favorite remedy and pressed on Nikita’s accomplice, Komar. He quickly cracked and wrote a guilty plea. Realizing that the accomplice broke down and taking into account the circumstances of the arrest, Nikita decided not to deny everything and tried to take everything on himself. Thus, the court could not impute the “group of people” and would have given much less punishment. However, in the testimony at the investigation, Nikita made a mistake and mentioned that there was also the distribution of roles (shooting, danger warning, video editing), and the joint purchase of materials for the Molotov.

During his arrest Yemelyanov did not lose heart, despite the ban on correspondence for the duration of the investigation. In protest against the ban on correspondence, he sent letters depicting police officers with his comments, for which he received a punishment cell. The cops demanded the names of the participants in other actions and access to his telegram-channel, to no avail.

During the trial, Nikita, in the face of a long prison sentence, showed courage and personal dignity, without bringing himself down to a plea for leniency. In contrast to the participants in the Network case, Yemelyanov did not obscure his views and act like a pacifist, and in the last word he stated in cold blood.

I believe that in the struggle for freedom, justice and human rights the goal justifies its means.

Nikita Yemelyanov proved himself to be a consistent anarchist and a fighter worthy of example. High ideals and personal qualities demand a high price, which our comrade accepted with his head raised proudly, for which he is respected and honored.