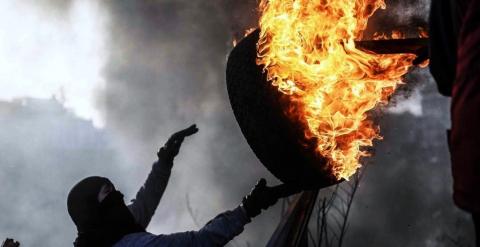 “The rulers on duty are outnumbered everywhere. Today, they can only resort to terrorism, frame-ups and manipulation via their regular channels: their armed forces, their means of (mis)communication, and their political theater…” – Words from the Chilean insurrection

We are a collective of anarchist women in struggle who join the call of the compañeras who are calling for the formation of a black anarchist bloc on March 8th.

Let’s take to the streets validating the beautiful practice of anarchist violence. Without leaders or parties, far from any group, collective or coordinating petition, far from hegemonic feminism, whether partisan, academic or altruistic. Our struggle is against the patriarchy, which is the basis of the family, the capitalist state, all religions and everything that oppresses us.

We fight for the destruction of everything that exists. Our lives are at stake.

The right to live our lives and make our own decisions about our bodies is not to be begged for, it is to be taken! That’s why we don’t seek dialogue, we don’t want reforms, we don’t promote laws, nor do we demand rights, we promote the combative struggle against power in all its dimensions.

We fight against all authority, that’s why our anarchic battle cry is No God, No State, No Master, No Husband!

We also join the call from the collective of las Brujas calling for a strike throughout the entire territory of so-called Mexico, but as the Fenomenicas Brujas and Insurrectionists say: one day is not enough for all of our rage! That’s why we support the proposal for a hot March, extending the street struggle and the stoppage of work for the entire month of March.

The destruction of work is part of our total liberation, let’s begin to free ourselves!

Let’s liberate the subway turnstiles for the whole month of March, let’s continue the strike in the schools, let’s take all the squares in the country and declare ourselves in a permanent sit-in all month, let’s confront all the institutions that propagate the patriarchal rule (Church, State and Capital), it’s not enough to explode the glass ceiling, we must destroy the sky with everything and your prick God!

We invite all anarchic individuals and collectives to join the anti-patriarchal struggle, and those who do not agree with our methods and still believe in reforms, in peaceful struggle, the promises of the State and in their Lord Jesus, we invite them to not get in our way: March 8th is not a day to celebrate, it is a day of war.

We will not accept the presence of any political parties, or government authorities. If they want to attend, they should be aware of the consequences…We know how to distinguish the enemy.

We know that the government officials are preparing a strategy to crush us…They have designed a route where they want the march to pass through and their blessed monuments, institutions and shops are guarded, they have marked the points where they plan to trap us, they have summoned the National Guard in civilian clothes to join the 3000 women police to repress us, once again they have ordered the state officials and the AMLOvers have formed a “peace cordon” to prevent us from demonstrating…

FOR US, WHOEVER CHOOSES TO BE ON THE OTHER SIDE OF THE BARRICADE IS OUR ENEMY, WHETHER MAN OR WOMAN, WHETHER IN CIVILIAN CLOTHES OR UNIFORM.

Let’s go beyond the routes that have been planned, let’s make a chaotic and uncontrollable black bloc that gives life to Anarchy.

Anti-Patriarchal Struggle Against the State and Capital!

No God, No State, No Master, No Husband!

For the control of our lives!

For the destruction of gender!

Let’s destroy everything that dominates and conditions us!

For the anarchic insurrectionary tension!

Review: On Anarchism and the Black Revolution