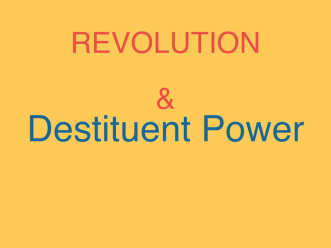 Destituent Power and Revolution: How do we de-activate the State without founding a new one? – MP3 – Torrent– Archive– YouTube

Historically, the revolutionary process in the West has centered on violently destroying a certain order and then re-founding a new order based on that prior violence. From the revolutionary terror of the French Revolution, and the writing of the American constitution in the wake of revolutionary war, to the authoritarian nightmare of the Soviet Union, to contemporary demands in Chile for a constitutional assembly, it seems impossible for revolutions to escape the logic of sovereignty, constituency, and security. How do we escape what Agamben calls the vicious spiral of terrorism and the State? Seeking a way out of the traps of modernity, some theorists and revolutionary movements have proposed an idea of destituent power: a revolutionary process that breaks the law not in order to found a new law, but to do away with the logic of law altogether.

This talk presents an overview of Italian philosopher Giorgio Agamben’s writing on the question of destituent power, tracing the history of the idea from Walter Benjamin and Georges Sorel, through the Italian Autonomia movement and the refusal of work, and into present theories of destituent power. Finally, we briefly discuss the interesting points of intersection between the largely European concept of destituent power, and the decidedly Black and North American concepts of fugitivity and the undercommons, rooted in Fred Moten’s work.

For those who are interested in the source material, reading suggestions include:

Giorgio Agamben, From the State of Control to a Praxis of Destituent Power

Giorgio Agamben, The Use of Bodies, Prologue and Epilogue