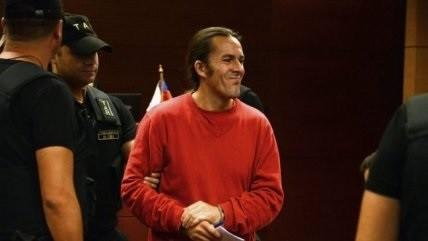 From the High Security Prison to the streets on fire: A subversive greeting from Juan Aliste Vega

I fly with these letters full of affection and conviction, embracing and sharing feelings of life and subversion, from the cell to the streets full of fire and decision.

I speak from here as an enemy of the State, in the high security prison, with 10 years in prison today and with a previous prison run of 12 years and with a life of continuous struggle.

With history and present confronting the State with its dictatorship, capitalism and its democratic and fascist models.

Full and willing, I greet you and I share this little affection that has oxygenated my heart in this territorial revolt as a result of the continuum, the porphyry, the anger and the rebellion of a new, fresh, reckless, fearless generation with a fertile hooded face in the fire and street fighting. With lucid scream full of impossible, able to face and tear down barriers and walls. Breath of hope between misery and social control.

The revolt was unleashed against social peace and control of lives. The youth, channeling rage, are capable with street fighting to dismantle politics and their structures of power and submission. This new generational encouragement has been banned by the repression of the State, by the hands of its servant lackeys: militias, pacos, police, and other vermin custodians of power.

The repression of the State with torture, imprisonment, mutilations, deaths and systematic impunity legitimized by laws, politicians and a passive citizen-public at the service of their interests and lives accommodated under their capital god.

Since October 18, without fear, with fire, stones and lead, taking the streets, sabotaging, expropriating, facing police repression, destroying the icons of power and making those who sustain them nervous.

The revolt is punctual; we savor the moment of struggle, far from what is claimed, the reasons remain to subvert.

With full respect, I greet the hooded and combative face of this generation, with revolutionary humility I consider this present as a stage-circumstance endowed with a continuum of struggle where many faces and projects conjugate it, the result of the cluster of rage that germinates rebellion.

I bet on a new step, the permanent subversion, the urban guerrillas, the libertarian oxygen that gives us the decisive decision to be free, owners of our acts and our feelings, without masters, without slaves, without prisons or states, without distances or borders. This implies going beyond assuming everyday anti-capitalist values, it also requires assuming confrontation to the same extent, living the confrontation, looking for forms, between new and old ones, mutating and remaining, oscillating between the multiplicity of expressions: from the arduous street confrontation to the most complex conspiracies and sabotages, take on the fight. It is always time for that.

I reiterate the embrace in complicity, savoring this black sky of revolt, which comes to nourish the conviction of life.

We are not passing through, we have decided on our lives, we have established a position and as an enemy of the state, I greet you in full and willing.

As long as there is misery, there will be Rebellion.

Strength to those who fight

Food Not Bombs: What to Know About the Free Meal Collective