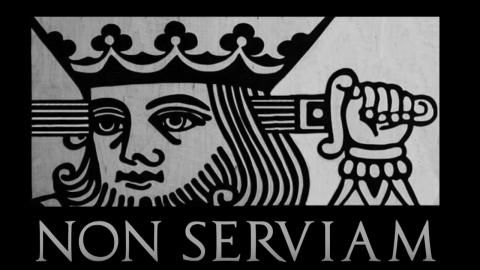 Joining me today is Joel Williamson of Non Serviam media. Joel is an individualist anarchist from Texas who has been involved in different activist projects over the years. These projects range from fundraising to support political prisoners such as Ross Ulbricht, organizing “counter-economic farmers markets, and engaging in varied direct action efforts. His activism has most recently been focused on Non Serviam Media, which is a small collective dedicated to exploring the world of anarchist and anti-authoritarian ideas through audio and video production.

If you spend much time in the left-libertarian or anarchist podcast space, you may have come across Non Serviam’s excellent podcast Joel hosts called Non Serviam. If you enjoy this show at all, you probably would enjoy, if you are not already enjoying, that show. I went back and looked at our guest backlog, and roughly half of our past guests have also appeared on Joel’s show. Because of the similarities between our shows and audience, we figured some cross-episodes between Non Serviam and MER were in order. I appeared on the latest episode of Non Serviam to discuss my work on democracy, nationalism, and political authority and, today, we are happy to have Joel on.

This was a fun conversation that covers a range of topics from underlying philosophical foundations of Joel’s anarchist outlook, to agorism, to praxis and direct action. It was much more exploratory and funny than previous episodes of MER, which made for a fun and insightful change in pace. I hope you enjoy listening to it as much as I enjoyed having it. Also, check out Joel’s interview with me on Non Serviam, as well as all his other episodes if you happen to enjoy this conversation.

Greece: Gare squatters say ‘The best days have yet to come’