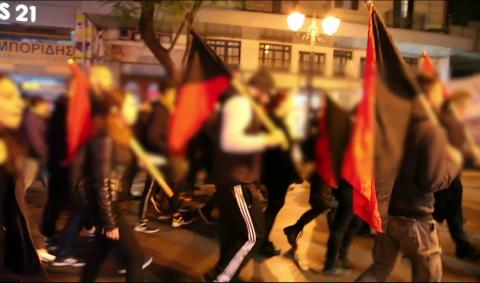 Greece, the edge of “Fortress Europe”, where since the 28th of February 2020 a brutal and inhuman geopolitical “game” has been at play. On the one side Turkey’s Erdogan, that tricked tens of thousands of migrants into believing that the borders to Europe, through Greece, are open for them to enter, in order for Turkey to blackmail the EU into supporting his terror campaign against the Kurds in Syria.

On the other side, Greece, that in order for the far right wing government to extract money from the European Union, for prison like concentration camps for migrants and for defense purposes, sealed the borders arresting anyone that manages to cross them.

And in no man’s land, thousands of refugees, used like pawns by both governments and the EU, being pushed by turkish forces that throw tear gas grenades and fire rubber bullets at the greek side of Evros and the greek forces throwing teargas grenades and using water cannons. Several reports from the turkish side say that migrants have been killed by bullets fired from the greek side, remaining unknown whether it is by the military or by nationalist vigilante militias.

Greek vigilante groups in Evros are roaming freely the borders, terrorising and arresting groups of migrants that manage to find a hole through the fence, while in the greek island of Lesbos vigilante groups act like a mob that has set check points at the edges and the centre of Mytilene town (the capital of Lesbos island), verbally abuse any migrants in dinghies that reach the greek shores, attack and terrorize volunteers or NGO workers aiding migrants, smash their cars or violently beat them. Fascists from several european countries have flown to Lesbos island to take part in the mob that attacks anyone not speaking greek, migrants, NGO workers or tourists. A school for refugee children has also been burnt to the ground by this right wing racist mob. Tourists, volunteers and NGO workers are fleeing Lesbos island because it’s not safe for anyone not speaking greek, except of foreign fascists and nationalists aiding the vigilante mobs.

And while you would think that these despicable acts would be condoned by the majority at least of the people, the contrary happens. Racists, nationalists, conservative, neoliberals, right wingers, social democrats, even some self-proclaimed lefties, have united in a front, backing these acts or turning a blind eye on them.

“First they came for the Communists, and I did not speak out, because I was not a Communist.

Then they came for the Socialists, and I did not speak out, because I was not a Socialist.

Then they came for the Jews, and I did not speak out, because I was not a Jew.

Then they came for me, and there was no one left to speak out for me”.

On Saturday, March 7, 2020, thousands of anarchists, anti-authoritarians, antifascists and people in solidarity in Athens, Greece, did exactly that. They chose to speak out, in defence of humanity against fascism, in defence of a world without borders, in defence of those who don’t have a voice because it has been choked by the teargas, the guns and the barbed wire fences at the edge of “Fortress Europe”.

How To Talk to the Media, If You Must