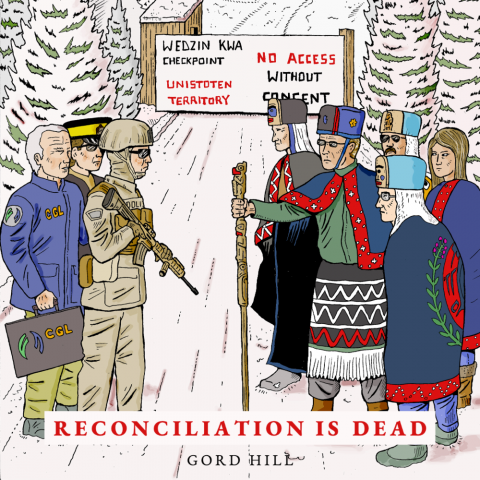 From Last Born in the Wilderness

In this interview, I speak with Indigenous artist, activist the author Gord Hill. We discuss the recent events at the Unist’ot’en Camp on the Wet’suwet’en First Nation’s territory in B.C., Canada, and the wave of solidarity actions that have sprung up across Canada the past several weeks in response to the RCMP’s invasion of their territory.

Over the past several weeks, the RCMP has invaded Wet’suwet’en sovereign territory and arrested numerous land defenders, including three Matriarchs — Freda Huson (Chief Howilhkat), Brenda Michell (Chief Geltiy), and Dr. Karla Tait (https://youtu.be/EgfVO6U5QuA) — to enforce an injunction to proceed with the construction of the Coastal GasLink pipeline project through their unceded territory. I ask Gord to update us on the dramatic acts of solidarity that have sprung up around Canada since this invasion began, in particular with the ongoing blockades spearheaded by members of the Mohawk Nation of railroads and roads, shutting down large sectors of the Canadian economy and putting enormous pressure on the Canadian government to carefully reconsider their next steps in this crisis. Citing the Oka Crisis of 1990 (https://youtu.be/ArOIdwcj2w8), Gord provides historical context to the scale and weight of the solidarity actions that have sprung up across the nation, and what is truly at stake in this struggle.

– Stay up to date with Indigenous, anti-capitalist, and anti-fascist resistance, as well as all the work Gord is doing: https://warriorpublications.wordpress.com

– Artwork in title card is by Gord Hill. Download: http://bit.ly/3bVnuRf

– Audio featured in introduction is from the video ‘Reconciliation Is Dead: RCMP Invade Unist’ot’en Territory’: https://youtu.be/EgfVO6U5QuA

– Song featured is “Yus” by Knxwledge from the album TodaysAlreadYesterday.: https://knxwledge.bandcamp.com/album/todaysalreadyesterday

We Talked with a Doctor About Coronavirus