Against Articulation: Declining Gender and Refusing All Identity 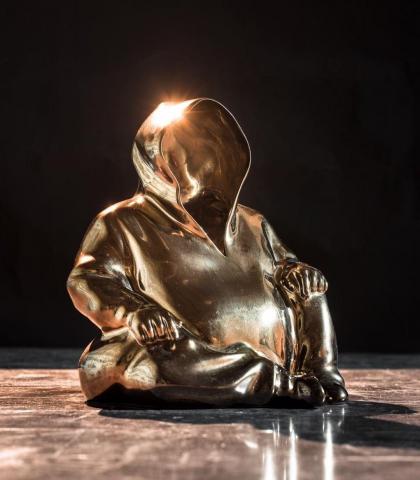 Refusal is a liminal concept: it is the lack of action. Refusal is not passive: that which is passive shrinks back and reacts, refusal stays silent. Refusal is not active: it is still like death.

Within the milieu created by the greatly-widened discourse on gender, there exist ever finer and finer-grains of identity. Gender, it seems, has blossomed out into a million novel forms. This is partly good, for it dissolves a much more restrictive, vitriolic system within its virgin multiplicities. However, it is clear this system reproduces the very same structures of power that plague the gender binary. Bodies are still evaluated as “feminine” and “masculine,” actors still as “passive” and “active.” New binaries have emerged: “cis” as opposed to “trans,” “queer” now opposed to “straight.” In other times, in other places, these terms held no meaning. All such binaries represent developments of the Western system of gender. All such binaries oppress the liminal.

All solid identity categories are susceptible to the same flaw: they inevitably fail. The logic of the Individual and its Identity, when faced with the failure or breakdown of meaning inside an atomized social subject, constructs a finer grain of identity in response. Thus, in the reification of identity, the power structures of race, gender, and sexuality become reproduced on deeper and deeper scales. There is no label in existence broad enough in its distinction to completely encompass one’s experience. We may tend towards identities with finer and finer grains, but inevitably, this fails to reach us. In *Living in the End Times*, Zizek writes:

A subject tries to articulate (“express”) itself in a signifying chain, this articulation fails, and by means of and through this failure, the subject emerges…In a love letter, the very failure of the writer to formulate his declaration in a clear and effective manner—his vacillations, the letter’s fragmentary nature, and so on—can in themselves be proof (perhaps are the necessary and only reliable proof) that the professed love is authentic: here, the very failure to deliver the message properly is the sign of its authenticity.

The failure of labels to reach the subject is the ultimate sign of one’s authenticity as being ungraspable by language. Thus, the refusal of identity is an integral part of the process of becoming Unique, freed from the grasp of language and symbolic thought altogether, that is, being itself: union with the One, with the Real beyond being and essence.

Refusal to articulate is not simply negation, but the negation of the negation. Earlier critiques of identity espoused under the mantle of “anti-identity anarchism” fail in one crucial aspect: they position the critic in an active role. One who is “anti-identity” is pointing away from pre-existing categories. This act of “pointing away” is itself an articulation, which replaces the primary element with its negation, or more properly, the affirmation of its negation. There is a fine line here between *refusal to articulate identity* and the *negation of identity*. In the negation of identity, the negative aspect is affirmed. One who proclaims themselves to be nonbinary, for example, affirms that they exist outside of the gender binary. One who refuses to articulate gender, on the contrary, remains in total silence. One is neither affirmed to be inside, nor outside, the gender binary. The very concept of gender is treated as something entirely alien and without meaning.

This same affirmation-of-the-negation is present in the milieu of antifascism and postleftism — both such categories are dependent on that which they are opposed to for their existence, therefore they have no existence of their own. Not phantoms, but parasites. Gender abolitionists, like antifascists and postleftists, chain themselves to their enemy, tying their fates. I will not further speak of milieus: one can refuse gender or they can take it. For my part, I refuse.