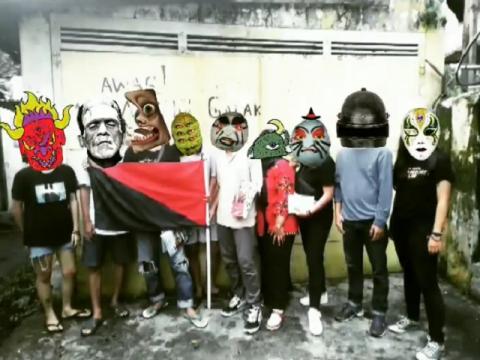 To all international anti-authoritarian and solidarity networks. Autonomous Homeless and Social Center (PSTO) Bethlehem, a squatting project in Salatiga in so called ‘Indonesia’, on Tuesday, March 10, 2020, was visited by a Satya Wacana Christian University (UKSW) as the legal owner of land and building certificates at the occupation site. They conveyed the plan to use the building after more than 5 years of abandoning the habitable building, just a month after the squatting project began.

We have a plan to develop local basis that includes the urban poor, students, workers and young people by providing living and working space, learning and organizing themselves through various planned activities. Some of these include providing living space for the homeless and the urban poor, a secretariat for trade unions and youth communities, public gardens and libraries, shelters or safe spaces for women and other gender orientations, and social kitchens. UKSW asks residents to stop all activities in Bethlehem within two weeks.

With this, we declare our position to stay in Bethlehem by ignoring the status of land ownership. We were f*ck up with all the land grabbing, evictions and homeless people sleeping on the street. We will seize and reclaim everything, because no one is illegal in their own earth! A Letter to Conservatives