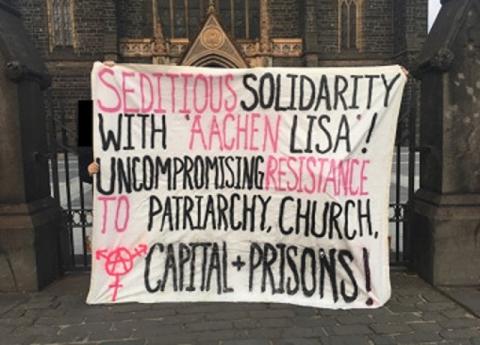 On March 10th, 2020, the prison supervisory magistrate decided to reduce Lisa‘s freedom of movement as she was “enjoying” semi-liberty (“tercer grado”, IE day release, weekend leave and other permits) by applying the 100.2, a condition that refuses exits at weekends and during the week unless justified for reasons of work.

This decision is the result of the appeal filed by the prosecutor of the Audiencia Nacional* last November asking for a return to “segundo grado” (or no chance to get out of prison), appealing to the fact that the comrade had not denied her anti-capitalist and anarchist ideology. Lisa’s lawyer has appealed.

Libertá per Lisa e per tuttx!

Freedom for Lisa and for everybody!

Fire to the prisons!

(via Round Robin, translated into English by Act For Freedom Now!)

*Note: The Audiencia Nacional (National Court) is a centralised court in Madrid that has jurisdiction over all of the Spanish territory.

Against the Coronavirus and the Opportunism of the State