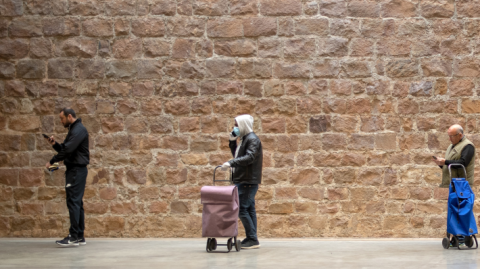 On the challenges faced by radical, anti-authoritarian, anarchist, feminist and other circles in dealing with the current “pandemic”.

In this text we would like to start the attempt to find a solidarity-based but also militant approach to the spread of the CoronaVirus. It is not about an assessment of the danger or the respective characteristics of this virus.
There have been and will always be new virus infections. Consequently, the current situation is not completely new. Diseases and pathogens are part of our lives, like death and society itself. We must therefore find a way of dealing with them beyond the existing crisis and panic reactions.

In Europe we have just gone through at least a century of social distancing, individualisation and atomisation. This isolation serves the capitalist forms of economy, e.g. to organise reproductive work or to prevent resistant and collective action against existing structures of domination. In addition, past pandemics and the idea that has taken root in all our minds and collective memory have also contributed to this: The “other” people can be dangerous. Getting too close to them means being infected under certain circumstances. To get the (invisible) disease. This widespread mistrust particularly affects people whom we understand as “foreign”. This mistrust hinders both the organisation of life in collective and affective communities to overcome injustice and the struggle against domination. It makes it more difficult for us to come into contact with people and create lasting human relationships. Whether it is to share a part of life or to fight together against oppression and exploitation.

Not only for the purpose of organization and future struggles, but for all of our lives as social beings, it is absolutely essential that we refuse the demands of social distancing (no physical and social contacts) and find ways to do just the opposite, while respecting personal feelings and limits.

According to the scientific findings to date, there are “risk groups” that have more to fear than others when infected with the virus. This applies especially to old people and those with certain pre-existing diseases. Let us approach these people and others, be they employees, neighbours or friends. Let’s see how we can support them and consider how they can also participate in social life and in our struggles. But who will show solidarity with the people whom society and the state define as superfluous and unimportant? Taking care of each other means to fight against patriarchal, racist, fascist structures, as well as to build mutually supportive, self-managed “care” structures.

Of course, young people should be aware of their privilege compared to older people, nothing can be said against it. But privileges are a complex matter. In the privileged, pacified Switzerland, sitting on all the wealth of the world, staying at home implies, for example, the privilege of having a home. Something that the migrants at the Turkish-Greek border do not have, who are rejected and killed by the military and fascist gangs with push-backs. A home is something that neither the migrants in the prisons and internment camps nor the homeless people in the European countries have. And neither the prisoners in the jails, who rightly revolt, but who are condemned by digital public opinion, by people who from their comfortable sofas don’t give a shit about these weak, excluded and exploited people.

Let’s create gangs. Let us respond to the demand for social distance with social closeness, solidarity and resistance!

We need to talk about death

Depending on the source, the virus has a mortality rate (probability of dying from infection) of between 0.5% and 3.4%. This is higher than the annual flu epidemic. The mortality rate increases with age and previous illness. Currently, the count goes so far that, for example in Italy, corona tests are still carried out after death. If there is a disease, the person is counted as “corona dead”, although it is unclear whether the person died of the CoronaVirus or merely – incidentally – infected by it.
A virus is a biological phenomenon, but the context in which it is born, its distribution and management are social issues. Reducing the discourse to medical issues means at this moment renouncing a libertarian and collective position.

We cannot avoid death. We will all die one day, most of us (in the privileged parts of this world) not from a so-called “natural” death, but from a disease. We must not become enemies of life for fear of death! On the contrary, we have to start talking about our understanding of health, illness and the traditionally religiously occupied topic of death. In the privileged parts of this world in a highly capitalistic society we have learned that sick people and deviations from the health norm lose their value for society and economy and are only a burden. That is why the first priority is to eliminate the disease. Not, however, the welfare of the people. We have to find a way of dealing, even collectively, with the fact that our existence is limited and that sooner or later we will die of a disease. If we treat these issues with shame and make them taboo, it is of no use to anyone – especially not to those for whom death or illness is a major issue. For a mutual and collective approach to illness and death!

The Corona virus brings to light very clearly which lives in the dominant society are considered valuable and worth protecting and which are not. Seldom has it become so clear how quickly the state and ” people in solidarity ” can act when they feel their well-being and the stability of a social order is called into question.

This here only in passing, because so much has already been said: Nobody cares about all those who starve, drown in the Mediterranean, die in bombs, are run over by cars, suicide, murdered by their husbands, suffer from cancer, are murdered in jails and on the external borders of Europe. But for those suffering from the CoronaVirus, freedom of movement is being restricted globally and surveillance and controls are being massively expanded.

For hundreds of millions of people, the idea of death, which can fall on anyone at any time, is not new. Just think of the damned of the earth who fall victim to profit and exploitation every day: those who survive under state bombs in the midst of endless wars over oil or mining, those who coexist with invisible radioactivity caused by accidents or nuclear waste, those who cross the Sahel or the Mediterranean and are locked up in concentration camps for migrants, those who suffer the misery and devastation caused by industrial agriculture and the extraction of raw materials …

Against the authoritarian shift

This outbreak is the dream and an experimental laboratory for the expansion of surveillance and control and the enforcement of power. Everyone has already heard it, but here once again the clue to the direction in which the journey is heading: In South Korea and China there are governmental apps which show where an infected person is and has been. Even if such an app is rather a curiosity by local standards:
For a long time now, there have been calls for the closure of the borders, the prohibition of sex work, the abolition of freedom of assembly, etc.etc. What we are still allowed to do: Accepting new tasks from our supervisor in front of the PC via Skype – some have to continue working with or without a virus, in the “home office” no goods can be produced, houses built or streets cleaned – and ordering new goods via onlineshop. We should renounce a social life, but continue to work and adhere to “measures” prescribed by the government in order to maintain the status quo.
What we are seeing now is also the attempt of a world, fearing its downfall, pulling out all the stops of control, isolation and discipline. Who will be most affected by the “measures” now being taken? Who is now sitting in the “home office” and who is still in contact with people? Who is working unpaid overtime? Who is now additionally denied access – to countries, buildings, opportunities? Who supplies all the goods, treats all the people? Who takes care of the children, now that schools and daycare centres are closing? Who is losing income, why, and is affected by short-time work? Who is now experiencing additional violence? Who will benefit from the rescue parachutes, support funds and accompanying measures?

Today, the same states that have based their existence on exploitation, imprisonment, war and massacres, including of their “own” people, force their “protection” through nations, borders and armed forces of order. How long will this situation last? Two weeks, a month, a year? We know that in France, the state of emergency declared after the attacks has been extended several times until the emergency measures have been finally incorporated into French law. Where will this new state of emergency take us? Emergency laws and states of emergency allow states and other influential parties to use mechanisms of repression, control and surveillance with a speed and force that would be unthinkable under “normal” circumstances.

It is up to us, as part of radical and anti-authoritarian movements, to keep our eyes open, to address these and many more questions, and to act. The institutional left will gladly (and together with the right) strengthen the state and finally take all-encompassing measures. Already now the voices of the left-wing rulers can be heard that we should show “solidarity” in the attempt to maintain and secure the economic system and with it the profits of those who own it.

In the best – and worst – case, the virus will also trigger a major economic crisis. The first signs are in progress, and there are economists who have been expecting a crisis for some time. Now at the latest we have to prepare ourselves for it! This will bring new possibilities and problems with it. We have to use these possibilities and find a collective and solidarity-based approach to the problems.

Let us make expropriation an issue again. And yes, of course: let us attack what was shit even before the virus. The camps and prisons must be removed, now more than ever! The borders anyway!
Let’s support strikers, occupants, revolting people in prisons and camps, and let’s see that the plundered goods are distributed instead of helping a few to get rich…
Let’s rebel in the streets, in the prisons, in the camps, like the prisoners of 30 Italian prisons, who, faced with the ban on visits imposed on them by Covid-19, rebelled, devastated, burned and in some cases even escaped their cages.
Let us encourage self-organisation and self-government, in the houses, streets, neighbourhoods, factories, prisons and camps. Let us look out for each other, support each other, form gangs and build solidarity-based structures.