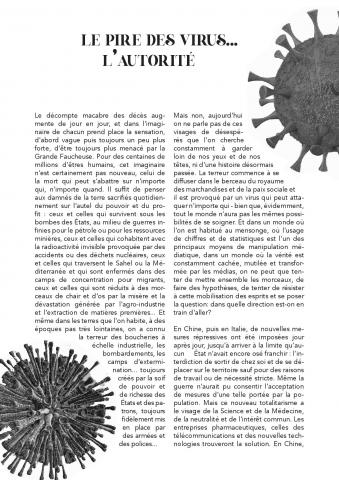 See also: ‘Coronavirus, Agribusiness and the State of Emergency’ by Silvia Ribeiro

About COVID-19, authoritarian delusions and the shitty world we live in…

The macabre death toll increases day by day, and in the imagination of each person takes place the sensation, at first vague then always a little stronger, of being more and more threatened by the Great Grim Reaper. For hundreds of millions of human beings, this imagining is certainly not new, that of death that can strike anyone, at any time. Just think of the damned of the earth sacrificed daily on the altar of power and profit: those who survive under State bombs, in the midst of endless wars over oil or mineral resources, those who coexist with invisible radioactivity caused by accidents or nuclear waste, those who cross the Sahel or the Mediterranean and are locked up in concentration camps for migrants, those who are reduced to pieces of flesh and bone by the misery and devastation caused by agro-industry and the extraction of raw materials…And even in the lands that we inhabit, in times not very long ago, we have known the terror of butcheries on an industrial scale, bombings, extermination camps…always created by the thirst for power and wealth of States and bosses, always faithfully set up by armies and police.

But no, today we are not talking about those desperate faces that we constantly try to keep away from our eyes and minds, nor about a history that is now past. Terror is beginning to spread in the cradle of the kingdom of commodities and social peace, and it is caused by a virus that can attack anyone – although of course, not everyone will have the same opportunities to cure themselves. And in a world where people are used to lying, where the use of figures and statistics are one of the main means of media manipulation, in a world where truth is constantly hidden, mutilated and transformed by the media, we can only try to put the pieces together, to formulate hypotheses, try to resist this mobilization of minds and ask the question: where are we going?

In China, and then in Italy, new repressive measures were imposed daily, until they reached the limit that no State had dared to cross yet: the ban on leaving one’s home and on moving around the country except for work reasons or absolute necessity. Not even during war would there have been consent to the acceptance of such far-reaching measures by the population. But this new totalitarianism has the face of Science and Medicine, of neutrality and common interest. Pharmaceutical, telecommunications and new technology will find the solution. In China, the use of geo-locating to report any movement and any case of infection, facial recognition and e-commerce are helping the State to ensure that every citizen is locked up in their own home. Today, the same states that have based their existence on confinement, war and massacre, including of their own population, impose their “protection” through prohibitions, borders and armed men. How long will this situation last? Two weeks, a month, a year? We know that the state of emergency declared after the attacks [translation note: originally imposed in 2015 following the Islamic State terrorist attacks in Paris] has been extended several times, until the emergency measures were definitively incorporated into French law. What will this new emergency lead us to?

A virus is a biological phenomenon, but the context in which it originates, its spread and its management are social issues. In the Amazon, Africa or Oceania, entire populations have been exterminated by viruses brought by settlers, while the settlers imposed their domination and way of life. In the rain forests, armies, merchants and missionaries pushed the people – who previously occupied the territory in a scattered way – to concentrate around schools, in villages or towns. This greatly facilitated the spread of devastating epidemics. Today, half the world’s population lives in cities, around the temples of Capital, and feeds on the products of agro-industry and intensive livestock farming. Any possibility of self-sufficiency has been eradicated by States and the market economy. And as long as the mega-machine of domination continues to function, human existence will be increasingly subjected to disasters that are not very “natural”, and to a management of them that will deprive us of any possibility of determining our lives.

Unless…in an increasingly dark and disturbing scenario, human beings decide to live as free beings, even if it is just for a few hours, days or years before the end – rather than shutting themselves up in a “natural” world, of fear and submission. As did the prisoners in 30 Italian prisons, faced with the ban on visiting rooms imposed because of Covid-19, by revolting against their jailers, demolishing and burning their cages and, in some cases, managing to escape.

NOW AND ALWAYS FIGHTING FOR FREEDOM!

(via Sans Attendre Demain, translated into English by Anarchists Worldwide)

A Letter From the Other Front