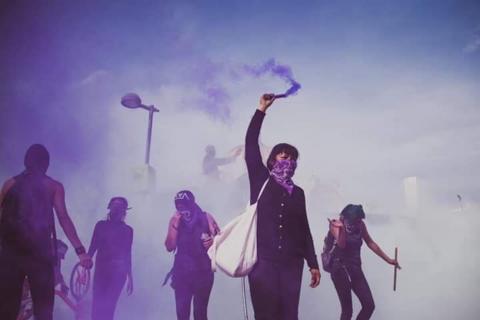 from it’s going down

The following communique comes from a group of anarchist women in Mexico analyzing the antagonisms within the recent women’s mobilizations and arguing for the necessity of self-defense.

There has been a recent rise in women’s mobilizations, actions and organization throughout the world, denouncing the multiple forms of violence to which we are submitted. However, at the same time, various forms of participation and denunciation within the women’s mobilizations have begun to become antagonistic.

This antagonism is headed by a series of liberal and white feminist values cultivated in an opportunistic manner within these mobilizations. The old discussion has arisen once again within those circles: We, the violent ones, those who challenge the liberal white feminist values, while continually questioning ourselves, what do we gain from graffitiing a wall, knocking down a fence, throwing a stone or a Molotov cocktail? NOTHING. What do we lose? We lose fear. We lose the disgust produced by the many times that we have been touched ever since we were little girls. We lose the exhaustion caused by years of looking for our missing sisters. We shed the punches of so many men that leave marks on our skin. We spit on their wages of misery and unemployment, which allow us to hardly give a taco to our daughters. We release the hatred inside of us for the guards who touch us when we go to visit our imprisoned compas, and those who stand by idly allowing the guards to exert their sexual torture on our dissident bodies. We lose so many things that we do it more and more, because daily we carry with us their perverse ways of continuing to corner us. But we will make room for ourselves!

We understand that capital, the State, religion and patriarchy are inherent in each one of us. At birth we are injected with these things. It is a chip that is embedded in us very deep, that governs the way we relate to other beings that inhabit this earth.

However, we also know of those who have historically dared to question such impositions. Trying to break that barrier that atomizes us as human beings and atomizes us from our environment. Those without names, without gender, without gods, without homelands, have emerged in each episode of revolt to reveal the miserable situation of which we have been subjected. Through the years, those beings have led revolutions, revolts, attacks and sabotage. They have taken the legitimate arm of violence for our liberation. They have understood that we will never be free if we believe in our executioners and their supposed good will.

Thus, violence from the hands of the violated, today, yesterday and tomorrow, will always be legitimate, replicable and just. Those who claim liberation and believe in the power of the state and its entire apparatus, that it will do us justice or watch over our well-being, are totally mistaken. They’ve automatically become part of the problem.

Punishing violence at all costs will not eliminate violence. It will only condemn and criminalize certain forms of violence like self-defense. In turn it perpetuates systemic violence, condemning all exploited and oppressed, keeping us in our place, in economic and social misery, while the heteropatriarchal capitalist system continues its course. It continues advancing, questioning itself little by little, in a peaceful manner, so as to be able to regenerate itself once it knows how it is failing. Thus it has the pathway laid out for it to become more and more perverse, just as it has done throughout the centuries.

Within this context, we strive for self-defense. Self-defense is a very broad term that implies self-care, mutual aid, solidarity, trust, community, sensitivity, and lots of other things. We, yes, WE, those that SOMETIMES are the black sheep in the mobilizations because often times we are the ONLY ONES that mobilize ourselves. There are times when we cannot do it and other times when we are the majority, including in massive mobilizations. We also fight in other spaces with self-defense, because it is there where we construct the foundations of a world that we can inhabit. Those spaces that do not bother you because you don’t go there, because the spectacle of the world doesn’t allow it. We take to the streets and protest in these ways. Not because we don’t put in work in our own spaces, but rather to destroy the hegemonic ones, with the certainty of finding each other. With these encounters, we gain strength and put that strength toward the autonomous struggle which strives for a world without systemic violence. That is the only cause for the need for self-defense.

In the various actions carried out in the massive mobilizations and the call for a women’s strike in the framework of the Day of Working Women, to try to stop the femicides and sexual aggressions against women, why demand punishment of women who have done nothing more than defend themselves against daily violence? Why ask for justice from a minority of privileged people that have not lived and will not live that violence in their bodies? We are the ones who have experienced class, gender and racial violence…we are the ones who decided to defend ourselves without asking permission from anyone because we were never given a voice, a word, a decision…we have raised our own voice, taking the word and deciding to respond to that violence, creating justice with our own hands.

Marking, condemning and criminalizing puts you on the side of the state and replicates its forms. Those same forms were created to keep us quiet and are presented in diverse expressions of social acceptance such as “good citizens,” “adequate and inclusive forms of protest,” and many more. It is not by marking the other that one can contribute to the struggle. It is more like becoming a policeman and guardian of state interests. You are the informant against the ones whose rage leaves its mark in the spaces where power is concentrated.

Even if you wear a green or purple scarf, you will never be an ally if you haven’t considered the contradiction of which you are a part and of which we have already pointed out has historical roots inside women’s mobilizations. We will not permit the return of white liberal feminism, through the criminalization of the other, that until now has only used its body to defend the historic monuments and tried to take off our masks.

In every cause that has the objective of freeing us from this shitty system that systematically abuses us, it was all of us and we will always be on the side of those that burn, attack, destroy, are imprisoned or killed. We will not back down. Our slogans are firm. We want to make them a reality with all the fire that burns in our hearts.

It was all of us!

No state-directed women’s security forces, no police, self-defense is the only way forward.