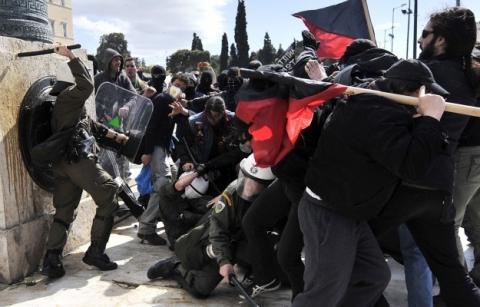 Marxism shares one thing in common with other authoritarian ideologies: they are against the individual. Even when Marxists claim to be anarchists or “anti-state communists,” they make sure that masses and classes are always more important than actual people. This is as obvious in Tiqqun or Theory of Bloom as it is in Stalin’s “Anarchism” or “Socialism”, and now, in Ausonia Calabrese’s Against Individualism. The fact that someone identifying themselves as an anarchist or a Stirnite could ever claim to be against individualism is beyond me, but I digress.

The main gist of the essay is that individuals are not a real material reality, despite the fact they clearly are. There’s a lot of academic jargon that Calabrese claims supports his argument, but how anyone could understand that is beyond me. A lot of communists hide behind such ruses, when in reality their actual positions are a lot simpler than that. Simply because individuals have parts or have desires and wills does not mean they are somehow inferior to masses and collectives: this is the precursor thinly-veiled power-grab like all self-styled Marxists all inevitably fall for. That is the ultimate goal of all anti-Individualists, because that’s what the opposition to the Individual implies. The rare times that Ausonia Calabrese gets beyond fancy wordplay and sloganeering, it is merely to deal with symptoms, treating them as causes. Superficiality is the current order of the day in what passes for theoretical endeavors, so they are only being fashionable. The author hides behind thick word salad to hide their true point: that the individual is, or should be, subservient to the whole or public or “greater good.” And how does this greater good differ from a state? It simply does not, because they are both tools for some to rule over others.

After warning us against organizations and milieus, supposedly under the guise of some bullshit “mystical anarchy,” Ausonia Calabrese and other communards call on us to “form communes.” They don’t explain how or why a commune is not a form of organization or a more solidified milieu,. They simply say: “It’s what makes us say ‘we’ and makes that an event.” Egoism isn’t even as Calabrese describes it. In reality, egoism is self-creation out of the nothing. This is what Stirner means when he talks about the Creative Nothing. Wolfi Landstreicher understands this lightyears ahead of Calabrese so it is funny that he attacks him. Wolfi seems to be a magnet for commies to attack. If I am to create myself and my life on my terms in each moment, the established, the permanent, the absolute, is my enemy, so I can’t favor any sort of permanent collectivity, community, or society. Any permanence that permeates me, petrifies me so that I am no longer able to create my self on my terms. I can only try to adapt myself to the permeating permanence. So in insisting upon creating myself on my own terms, I undermine all collectivity, all community, all organization and all society, even those temporary associations I choose to make for my own purposes, since once they no longer serve my purposes I pull myself out and let things fall where they may. This is why my egoist elegance prefers desultory duos, transitory trios, and ephemeral ensembles to permanent partnerships, solidified sodalities, and calcified collectivities.

Communism, even under the guise of nihilism, requires a permanent community. If this isn’t its aim, the word is meaningless, nothing more than the babbling baloney of blowhards battering for their share of revolutionary cred. A lot of the current commies have lost faith in the Gospel of Marx and its promise of predestined communism (of course, no anarchist-communist ever put faith in this pious promise, right?). But even those who conceived “communization” – the idea of communism as an ongoing movement toward community – don’t get away from this goal, because communization is still supposed to be a movement toward that universal (and so, permanent) human community. And what is permanent and universal is anti-individual, anti-me, my enemy. Whether they claim to be anarchist or not, anyone who proclaims himself to be an anti-individualist is my enemy.

AGAINST COMMUNES, AGAINST LEVIATHAN

Ausonia Calabrese’s Essay “Against Individualism: The Individual Is Not So”

Anarchy in Albion: Building utopia in the heart of Yorkshire