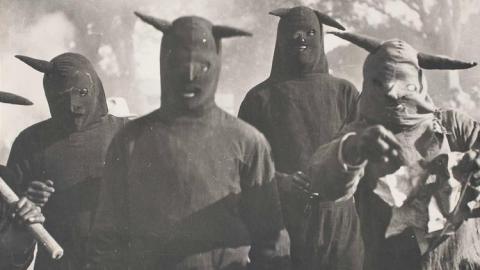 1. The left-wing of ideology obfuscates as much as its right-wing counterpart.

The left operates according to a calcified logic that veils the nature of the social order around us. Regarding anti-fascism, this confusion manifests within the context of a false dichotomy imagined between fascism and democracy. The master plan is that anti-fascism must function immediately as a means of restoring capitalism to its more “human” state, demonstrable trajectories of fascism as an outgrowth of liberalism be damned. Other instances of muddled theory include reductive frameworks that posit class as the sole site of struggle, the obsession with consciousness raising, and an unyielding faith in the democratic principle.

2a. Leftist mystification is reflected concretely in its organizational efforts.

In the real world, leftist organizations approach anti-fascism through certain avenues. The theoretical defense of democracy for instance means many leftists stand readily available to fight alongside the bourgeois state. The poverty of the struggle when conceived in such ways has been noted by those on the margins of both anarchist and Marxist groupings. Such figures rightly saw this anti-fascism as simply being the politics of the Popular Front, and all the failures associated with it: class collaboration, betrayal, and defeat (often in this order).

At the same time, the emphasis on consciousness has leftists squander valuable time, energies, and material resources attempting to convert reactionaries to their “side.” Never is it asked if those from the far-right have anything to offer in the first place, as converted leftists or otherwise.

More generally, the naked opportunism of viewing struggles against fascism as part of a battle for followers is worth considering as well. Taken to its logical conclusions, one finds a practice that is as amusing as it is repulsive. Next to anarchist efforts to arm Black individuals against racist militias in the disaster zone of post-Katrina Louisiana, members of the now-defunct International Socialist Organization attempted to sell their newspapers. The anarchists forced them to leave at gunpoint.

2b. Perhaps more crucially, sections of the left uphold a politics that is functionally indistinguishable from fascism itself.

If fascism is understood as a specific historical phase of capitalist development, then nothing, excluding a handful of European societies during the early to mid-twentieth century, can be classified as such. If fascism is, however, conceptualized as a broader category of setups where a modern capitalist state attempts to establish control over a disintegrating order, in the process creating a highly regimented society, fostering a militant nationalism and cult of personality, eliminating segments of the population, and destroying space for even a farcical opposition, then certainly many leftist programs were fascist.

Any differences would have seemed largely academic to the millions of proletarians worked to death, minorities dispossessed and subjected to genocide, or queers brutalized in the gulags.

3. Appeals to expedience are discredited by the near-zero influence the left wields as a political force.

Many who would like to disregard the divisions outlined above hold there to be an urgent need for leftist contributions in the fight against fascism. Such an appeal to realism ignores the very real fact that politically and in terms of combat capabilities, the left forms an utterly insignificant configuration today. Though scattered groups of Marxist-Leninists, Trotskyists, and anarcho-syndicalists in the milieu feature prominently in “radical spaces” and the academy, it remains that in terms of boots on the ground, they are at best useless and at worst a hindrance due to their active alienation of everyone who is not already a committed believer.

Distant are the days when the unions and communist parties were at the very least a disruptive force to be dealt with, mobilizing millions of working class within their social terrain. Left unity is therefore less an expression of pragmatism than it is an idealist effort at resurrecting long-dead beasts.

4. An alliance with the entirety of the left opens a Pandora’s box of collaboration.

Given leftist theoretical shortcomings, record of repression, and impotence as a force on the streets, it is always worth asking advocates of left unity, “Where are these lines drawn?” Would it also be useful to work with White nationalists against globalization, right-libertarians against certain functions of the state, and Salafi-Jihadis against Western policy in the Middle-East?

As offensive as the above suggestions may seem, such esoteric games make perfect sense within the logic of dominant anti-fascist discourse. Beyond the endless hair-splitting at conferences, beyond the posturing at demonstrations, beyond platitudes one may hear in a more polite reading group, it remains that leftist opposition to fascism is as superficial as the above groups’ positions—and all would like to see anarchists done away with the moment these very specific battles are won.

5. Programs based on unity can only exist alongside an utter lack of anarchist imagination.

Focusing primarily on fascism as the enemy to be defeated at all costs forms part of a maddeningly narrow worldview. Instead of analyzing the struggle against fascism as only one step along the way to the world one wishes to inhabit, many on the left consider fascism and anti-fascist efforts to be the principal contradiction today.

The divide between these orientations cannot be overstated. Whereas the former position approaches the social relations of capital and the state (both in their fascist and democratic forms) as obstacles that must be removed in the process of creating anarchy, the latter presents grappling with these systems as the social struggle in its totality. There exists no observable desire for a freer existence beyond the experience of a miserable struggle. It is not difficult to see how such a perspective can leave one open to allying with those diametrically opposed to one’s beliefs.

The Anarchists versus the Plague