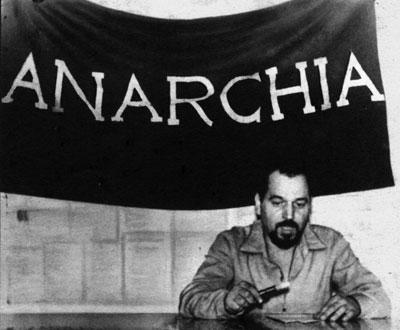 From The Press Democrat, California

Written almost half a century ago by Italian playwright Dario Fo, winner of the Nobel Prize for Literature, “Accidental Death of an Anarchist” deals with a straightforward question: Just how did a suspected insurgent, while in police custody, fall out a fourth-floor window to his death?

The play, opening next week at Main Stage West in Sebastopol, is inspired by an actual death. Italian rail worker and anarchist Giuseppe Pinelli died in December 1969 under mysterious circumstances while in custody at a police station in Milan, Italy. Pinelli was accused of the notorious Piazza Fontana bombing three days earlier that killed 16 people. But he was cleared of the charges after he died.

In the play, the death is reported as an accident, but then a troublemaker known only as the Maniac sets out to confuse, expose and humiliate the police, employing several disguises in one ruse after another.

“It’s a satirical farce with a message,” said local director David Lear, active in the Sonoma County theater scene for more than two decades. “I was looking for something we haven’t done before.”

That’s a challenge for Lear, known not only for his work at Main Stage West, but also the Cinnabar Theater in Petaluma, the Spreckels Performing Arts Center in Rohnert Park and the 6th Street Playhouse in Santa Rosa. Fans particularly remember his former Shakespeare in the Cannery summer series in Santa Rosa’s Railroad Square district.

Main Stage West is run by the husband-and-wife team of John Craven, interim managing director, and Elizabeth Craven, artistic director. In “Accidental Death of an Anarchist,” John Craven also stars as the Maniac.

“It’s an overwhelming part,” Lear said. “He has a massive amount of lines to deliver, and so much of the role has to do with the disguises he uses, but he’s doing a fine job. Everybody in the cast is working hard. It’s a difficult play to do.”

The challenge during rehearsals has been to find the right emotional tone for the show, Lear said.

“We trying to poke fun at authority,” he explained. “It’s a very funny play with an underlying message about politics, the military and police corruption, based on a true event back in the ’60s in Milan.”

Don’t worry too much about the word “death” in the title of this show. If it all sounds a bit grim, just think the Keystone Kops meet Monty Python.

In fact, while Lear hasn’t substantially changed the script at all, he has added some contemporary touches.

“We have insidiously inserted President Trump’s name in part of the play, with a few other references,” the director said.

“It’s completely out there,” Elizabeth Craven said. “Dario Fo is known for his satire. It’s very timely. When people see it, they can’t believe it was written in the ’70s.”

If You Go – [edit: Opening postponed until May 8, more information via mainstagewest.com]

What: “Accidental Death of an Anarchist” by Dario Fo