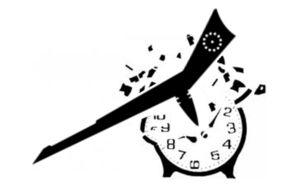 …This is a transmission from a future that will not happen. From a people who do not exist…

“The end is near. Or has it come and gone before?”
– An ancestor

We live the future of a past that is not our own.
It is a history of utopian fantasies and apocalyptic idealization.
It is a pathogenic global social order of imagined futures, built upon genocide, enslavement, ecocide, and total ruination.

What conclusions are to be realized in a world constructed of bones and empty metaphors? A world of fetishized endings calculated amidst the collective fiction of virulent specters. From religious tomes to fictionalized scientific entertainment, each imagined timeline constructed so predictably; beginning, middle, and ultimately, The End.
Inevitably in this narrative there’s a protagonist fighting an Enemy Other (a generic appropriation of African/Haitian spirituality, a “zombie”?), and spoiler alert: it’s not you or me. So many are eagerly ready to be the lone survivors of the “zombie apocalypse.” But these are interchangeable metaphors, this zombie/Other, this apocalypse.   These empty metaphors, this linearity, only exist within the language of nightmares, they are at once part of the apocalyptic imagination and impulse. This way of “living,” or “culture,” is one of domination that consumes all for it’s own benefit. It is an economic and political reordering to fit a reality resting on pillars of competition, ownership, and control in pursuit of profit and permanent exploitation. It professes “freedom” yet its foundation is set on lands stolen while its very structure is built by stolen lives.

It is this very “culture” that must always have an Enemy Other, to lay blame, to lay claim, to affront, enslave and murder.
A subhuman enemy that any and all forms of extreme violence are not only permitted but expected to be put upon. If it doesn’t have an immediate Other, it meticulously constructs one. This Other is not made from fear but its destruction is compelled by it. This Other is constituted from apocalyptic axioms and permanent misery. This Othering, this weitko disease, is perhaps best symptomatized in its simplest stratagem, in that of our silenced remakening:
They are dirty, They are unsuited for life, They are unable, They are incapable, They are disposable, They are non-believers, They are unworthy, They are made to benefit us, They hate our freedom, They are undocumented, They are queer, They are black, They are Indigenous, They are less than, They are against us, until finally, They are no more.
In this constant mantra of violence reframed, it’s either You or it’s Them.
It is the Other who is sacrificed for an immortal and cancerous continuity. It is the Other who is poisoned, who is bombed, who is left quietly beneath the rubble.
This way of unbeing, which has infected all aspects of our lives, which is responsible for the annihilation of entire species, the toxification of oceans, air and earth, the clear-cutting and burning of whole forests, mass incarceration, the technological possibility of world ending warfare, and raising the temperatures on a global scale, this is the deadly politics of capitalism, it’s pandemic.

An ending that has come before.

The physical, mental, emotional, and spiritual invasion of our lands, bodies, and minds to settle and to exploit, is colonialism. Ships sailed on poisoned winds and bloodied tides across oceans pushed with a shallow breath and impulse to bondage, millions upon millions of lives were quietly extinguished before they could name their enemy. 1492. 1918. 2020…

Biowarfare blankets, the slaughter of our relative the buffalo, the damming of lifegiving rivers, the scorching of untarnished earth, the forced marches, the treatied imprisonment, coercive education through abuse and violence.
The day to day post-war, post-genocide, trading post-colonial humiliation of our slow mass suicide on the altar of capitalism; work, income, pay rent, drink, fuck, breed, retire, die. It’s on the roadside, it’s on sale at Indian markets, serving drinks at the casino, restocking Bashas, it’s nice Indians behind, you.

These are the gifts of infesting manifest destinies, this is that futured imaginary our captors would have us perpetuate and be a part. The merciless imposition of this dead world was driven by an idealized utopia as Charnel House, it was “for our own good” an act of “civilization.”
Killing the “Indian”; killing our past and with it our future. “Saving the man”; imposing another past and with it another future.

These are the apocalyptic ideals of abusers, racists and hetero-patriarchs. The doctrinal blind faith of those who can only see life through a prism, a fractured kaleidoscope of an endless and total war.

Its an apocalyptic that colonizes our imaginations and destroys our past and future simultaneously. It is a struggle to dominate human meaning and all existence.
This is the futurism of the colonizer, the capitalist. It is at once every future ever stolen by the plunderer, the warmonger and the rapist.

This has always been about existence and non-existence. It is apocalypse, actualized. And with the only certainty being a deathly end, colonialism is a plague.

Our ancestors dreamt against the end of the world.

Many worlds have gone before this one. Our traditional histories are tightly woven with the fabric of the birthing and ending of worlds. Through these cataclysms we have gained many lessons that have shaped who we are and how we are to be with one another. Our ways of being are informed through finding harmony through and from the destruction of worlds. The Elliptic. Birth. Death. Rebirth.

We have an unknowing of histories upon histories of the world that is part of us. It is the language of the cosmos, it speaks in prophecies long carved in the scars where our ancestors dreamed. It is the ghostdance, the seven fires, the birth of the White Buffalo, the seventh generation, it is the five suns, it is written in stone near Oraibi, and beyond. These prophecies are not just predictive, they have also been diagnostic and instructive.

We are the dreamers dreamt by our ancestors. We have traversed all time between the breaths of our dreams. We exist at once with our ancestors and unbirthed generations. Our future is held in our hands. It is our mutuality and interdependence. It is our relative. It is in the creases of our memories, folded gently by our ancestors. It is our collective Dreamtime, and it is Now. Then. Tomorrow. Yesterday.

The anti-colonial imagination isn’t a subjective reaction to colonial futurisms, it is anti-settler future. Our life cycles are not linear, our future exists without time. It is a dream, uncolonized.

This is the Indigenous anti-future.

We are not concerned with how our enemies name their dead world or how they recognize or acknowledge us or these lands. We are not concerned with re-working their ways of managing control or honoring their dead agreements or treaties. They will not be compelled to end the destruction that their world is predicated upon. We do not plead with them to end global warming, as it is the conclusion of their apocalyptic imperative and their life is built upon the death of Mother Earth.  We bury the right wing and the left wing together in the earth they are so hungry to consume. The conclusion of the ideological war of colonial politics is that Indigenous Peoples always lose, unless we lose ourselves.   Capitalists and colonizers will not lead us out of their dead futures.
Apocalyptic idealization is a self fulfilling prophecy. It is the linear world ending from within. Apocalyptic logic exists within a spiritual, mental, and emotional dead zone that also cannibalizes itself. It is the dead risen to consume all life.

Our world lives when their world ceases to exist.

As Indigenous anti-futurists, we are the consequence of the history of the colonizer’s future. We are the consequence of their war against Mother Earth. We will not allow the specter of the colonizer, the ghosts of the past to haunt the ruins of this world. We are the actualization of our prophecies.
This is the re-emergence of the world of cycles.
This is our ceremony.
Between silent skies. The world breathes again and the fever subsides.
The land is quiet. Waiting for us to listen.

When there are less distractions, we go to the place where our ancestors emerged.

There is a song older than worlds here, it heals deeper then the colonizer’s blade could ever cut.

And there, our voice. We were always healers. This is the first medicine.

Colonialism is a plague, capitalism is pandemic.
These systems are anti-life, they will not be compelled to cure themselves.
We will not allow these corrupted sickened systems to recuperate.
We will spread.

We are the antibodies.

Addendum: In our past/your future it was the unsystematic non-linear attacks on vulnerable critical infrastructure such as gas utilities, transportation corridors, power supplies, communications systems, and more, that made settler colonialism an impossibility on these lands.