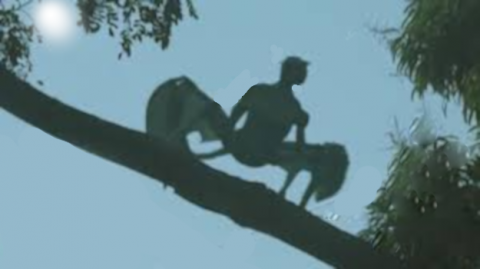 welcome back to qteotw news. next up, swizzlezap from our intergalactic travel desk.

thank you, fphonny. today we’re hearing from one of our favorite intrepid travelers, karmalita nilnil. yo reports that the invasive species currently ravaging one of our past popular getaways, earth (gaia, turtle island, urantia, …), has itself been infested with, yet again, another life sucking horde. karmalita, what can you tell us from the ground – or are you up a tree again 🙂

hey swizz, i AM in a tree at the moment. the view from here is fabulous. clear skies, empty beaches…barely a hyumon in sight. so quiet, except for the many singing flying creatures.

i arrived here about three earthweeks ago. i was headed to vsblantia when i noticed some unusual changes in the atmosphere above several earth regions. the last time i slid through this way these spots were invisible. with this flyby, the thick cloud of smelly, gagging, gnar was nearly gone and i could see land and waterways below. i just had to stop in and see what sort of party these crazy hyumons were throwing that could blow away such a mess; not in one place but in hopscotch fashion around the globe.

turns out, some heretofore unknown group of travelers (really swizzle, a “life sucking horde”?) has shown up uninvited to occupy hyumon breathing apparatuses. in other critters too but they don’t seem to take notice. anyway, these hyumons started dropping out, first just a few, then a cluster, then in larger and larger amounts in more and more places (you know how those viral partiers roll.) most were just a touch ill so they kept running their many machines. when others got seriously sick, they went into big box hospitals filled with lots of other really sick ones.

then they started dying, i guess more then expected when some critter or another stops in for a bite and snuggle. in some places, they are dying in such great numbers at once they can’t get them to the incinerators fast enough. in some places they’ve given up trying to save their ancient ones at all. that is the rumor on the wires. this calamity seems to be scaring the crap out of them since they are grabbing up giant stacks of the fluffy white cylinders used for their excremental waste ritual.

this bugaboo – i’ve named it hint-2020 – caused many of their biggest burning machines to stop, hence the clearing skies. i couldn’t see how a hint could do this…previous ones have not had such an effect – they can’t damage the machines’ materials. check it our swizzle…the hyumons themselves are turning off the technospewers! lots of them are just off.

as i understand the situation, the overlords told the hyumons that if they all just hid away long enough, the new sickness will go away quicker and things can get back to normal. seems most are complying without question. others think they are resistant and are partying hardy, spreading the hint with enthusiasm. some are heading for the hills, away from their megalopolises. every now and them i see one or two here and there, gliding through trees and alleys – they look like they are playing a game, enjoying themselves. seems some hyumons are not resisting the hint so much as the overlords themselves. perhaps they are not even hyumons – an enticing thought, swizz.

could it be that this wave of aero-bnbers might finally knock down the hyumongroup hard and long enough to let this lovely place regain more of its earlier beauty, savage and unpredictable though it is? of course, i want some of those whacky 4-leggeds to survive. they can be a most enjoyable diversion with their moves and sounds. remember the old stories we grew up with about these creatures? that their original motto was, “oh, we do like to jump and dance and wiggle while we holler and sing and pitch a giggle”. and don’t get me started on their mating habits, swizz ;-).

alas, my optimism has been been squashed with the finality of the jahallahgodrobyu bugsplat dance. based on these initial observations, only a tiny percentage of them will be toasted. and if earlier traveler reports can be believed, the survivors and most of the resistant will pop right back to their unrelenting and intensive death and destruction. hyumans and machines roaring and spewing, post haste. this, swizz, is what they call “normal”.

keeping earth one stopover to miss when heading to vsblantia and beyond.

i’ll leave you with a warning – or is it a challenge. smack dab in the midst of this chaos, a musky little unit tossed up another batch of space junk into the planet’s increasingly crowded orbit meant to help their overlords keep a pyramidal eye on the whole lot of them. so beware travelers, your duck and dodge techniques may need honing if you want to venture out this way.

speaking of dodge, i’m outta here. til next time …tschüss!

Tags:
no idea what this is about but it seems interesting… recieved a few weeks back.