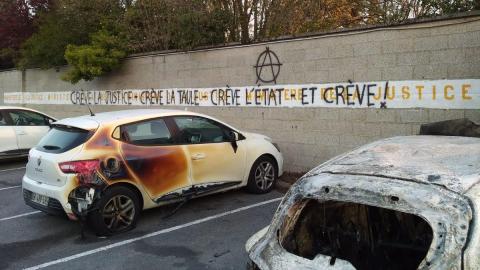 01.04.2020: This is the first time that the offices of the SPIP, the Somme’s Integration and Probation Prison Service, have been targeted by such an attack. During the night of Tuesday to Wednesday, around 3:30AM, one or more individuals torched several vehicles.

The vehicles were parked in a private parking lot behind the offices. Two vans used to take the detainees to the courthouse were torched. Five cars that allowed officers to visit detainees in open facilities, such as for parole, were also destroyed. “Die Justice, Die Jail, Die State, Die!” was sprayed with black paint on the walls of the car park. It was signed with a circle A symbol of the anarchist movement. But the prosecutor of Amiens is being cautious. Nothing so far confirms this lead. Alexandre de Bosschère for whom this attack is above all symbolic: “it is not the SPIP itself that is targeted but justice, the State”.

An investigation has been opened and the images from the CCTV cameras exploited. But for the Force Ouvrière union, the individual or individuals would have passed through the back of the buildings. A simple barrier protects the entrance to the car park, while in front, facing the prison, the heavy white door is placed under video surveillance.