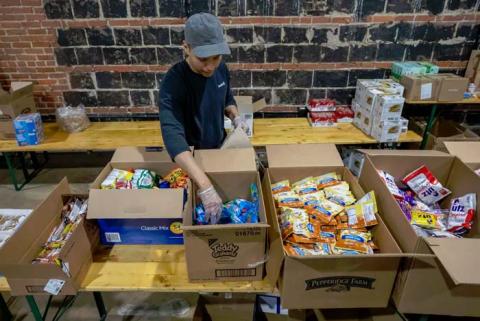 from the conversation. com

Empty supermarket shelves and panicked government briefings have become the defining images of the coronavirus crisis. But the community response, however, may well be a more enduring feature. The virus and the enforcement of social isolation have sparked uncertainty and anxiety. But a range of local volunteer-run mutual aid networks have also emerged.

Many of the people involved in these groups know that the term “mutual aid” was made famous by the 19th-century anarchist Peter Kropotkin. He used it to attack Social Darwinists who described nature as a competitive fight between self-interested individuals. “Survival of the fittest” became their catch phrase and was used to describe antagonistic relationships between people, races and states. This way of thinking normalised aggression as a natural response to scarcity.

In the present context, the implication is that scrapping for the last bottle of hand sanitiser or roll of toilet paper is a programmed, inevitable response. If only the strongest survive, then others should be seen as rivals or even enemies and we are right to take all necessary measures to preserve ourselves against them.

Although Kropotkin accepted that competition was a factor determining biological fitness, his argument was that cooperation – or mutual aid – was as significant.

As an ethical idea, mutual aid describes the efforts people make to help others without seeking reward. It thrives in local, voluntary organisation. The Lifeboat Association, initiated in the UK by William Hillary to support the foundation of a national institution to save victims of shipwrecks, was an example of the ethical self-organising that Kropotkin had in mind.

Hillary appealed to the king in 1825 to support his project, explaining that his aim was to aid “people and vessels of every nation, whether in peace or in war”. His cause was at once “individual, national, and universal”. He imagined that the establishment of a British association would inspire the foundation of sister organisations across the world.

Kropotkin liked the Lifeboat Association because it relied on “cooperation … enthusiasm … local knowledge”. It rescued anyone in need and because it depended on local action, it could be replicated easily elsewhere. It was a template for global networking to build solidarity.

Working together in a time of crisis

This is the spirit we see in the support networks emerging as people confront the coronavirus pandemic. Neighbours helping neighbours. Those who are able to leave their homes are collecting prescriptions and essential supplies for the vulnerable. Groups networking across towns and cities are pooling resources so that no one is left without.

Community support has always been a core aspect of human social life. Research looking at the way people go about their different everyday tasks shows that far more time than we might imagine is spent on unpaid community support. Mutual aid and cooperation – such as neighbours looking after each other’s children or helping each other fix their cars – run through society. It is a mistake to think that the prospect of profit motivates our behaviour.

Mutual aid is often seen in times of crisis or horrible catastrophe – for example, in the aftermath of Hurricane Sandy in the US and the Grenfell fire in London. Its emergence now bears out Kropotkin’s observations about the capacity for everyday solidarity. The question he would ask is: how can we expand these practices to rethink our social organisation?

Kropotkin described the Lifeboat Association as “perfectly spontaneous”. This did not mean that he thought it was unplanned. It meant that it was not forced by law. Trust and practice were essential to Kropotkin’s vision of the world remade through cooperation and respect for local self-determination.

With resources stretched to their limits, governments all over the world are relying on mutual aid networks to help those most at risk by shopping for those in isolation or sending virtual messages of support to prevent demoralisation.

Perhaps, then, we can start to think about how to preserve community-based organisation in the post-coronavirus world.

There is a significant difference between the politics of mutual aid and neo-liberal projects intended to privatise government services. Kropotkin did not want to see responsibility for government services devolved to big corporations or cash strapped volunteers. His aim was to attack existing power structures. Mutual aid thrives in conditions of equality and it is a necessary part of an anarchist drive towards decentralised federation.

If business-as-usual austerity returns after the crisis, the fertile ground of mutual aid may well dry up. The maintenance and extension of basic income, in contrast, may help preserve and promote grassroots social change in the longer term.

Modes of politics at a distance from the state: A critical assessment