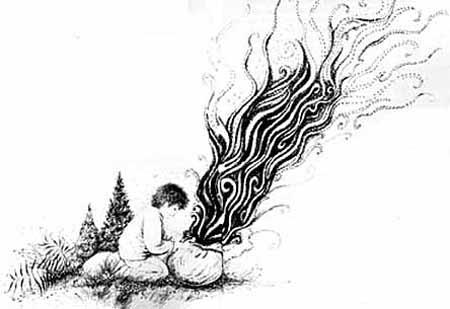 If there is a quality to the wild world, that often gets called “nature”, which is by all appearances “unchanging”, it is that it is always changing. It is not static and is never (entirely) the same as it was.

Even the mightiest mountain moves its slow dances across the landscape, while it also moves with the processes of winds, rains and subsidence. The transient flow of a river is a more obvious space of movement and change, with its greater intensity of energetic-motion – one philosophy enthusiasts will remember as Heraclitus’s image for Being.

As animals, we undergo processes of metamorphosis that alter our Being continually. We move as the world changes and we change with it.

Of course, we may well be rhymes of what we were, similar in sound and shape. It would be ridiculous to expect continual totalising becomings, that render nothing similar. But change retains its paradoxically unchanging presence.

If rewilding really signifies re-membering ourselves – as in returning to the community of wild changing beings-as-becomings, through disassociating with that realm that attempts to construct an eternal unchanging presence (by “conquering” death), that we know as civilisation (a constant failure) – then those of us embracing the wild world, if we mean this authentically, are embracing ourselves as changing Beings. That aforementioned realm of unchanging sedentaryism that we know as civilisation persists both geographically, in the formation of towns, cities, nations etc., and psychically, through the ideation of essences, laws and so on.

Perhaps the greatest weakness to any process of rewilding, which seeks to create space for the resurgence of primal anarchy, is intensely sedentary thinking(?).

The essay that Kevin Tucker wrote 10 years ago, The Failure of Revolution, has resurfaced again. This is a piece that I have appreciated, along with much of Tucker’s thought. However, my question is – what has changed about Tucker’s critique of revolutionary thought? If nothing, why nothing? Hasn’t his experience of the world moved even slightly with the world? Is this a sedentary place within his thinking?

Perhaps Tucker’s most more recent valuable piece of writing, which doesn’t conform to the (perhaps unfair) criticism of his spending much of his 20 year process of being an anarchist theorist basically rewriting the same thing, is To The Captives. His (psychic-)nomadic movement here, with a partial critique of some of the limits to anarcho-primitivism, is something I see as needed within rewilding anarchist thought.

Another nomadic movement within anarcho-primitivist thought is that which Ria Montana brings to the discourse – that I reviewed here. I might have disagreements with Montana, but I appreciate that she is challenging some of the orthodox beliefs and inherited assumptions within rewilding praxis. Again, there is something desirable about individuals moving away from the sedentary locations that plagues this area of discourse

It is remarkable that Tucker has felt the need to (continually) act with hostility towards individuals and ideas that do not try to occupy spaces that are different to those of his and the traditional framework of primitivist philosophy – especially when Tucker is at his best when he moves away from that space.

Perhaps I am like a feather, leaf or (maybe even a) bag, floating in the wind. I am not a settlement and not settled. As the world changes, there are new places to explore and new challenges, which I am learning to move with and through.

I guess my question to primitivism is – is this a sedentary settlement, building monocultures, or a space for wild, moving, differentiating, diverse praxis?

I will leave this thought here, with a quote from the primitivist I have focused my thought on here the most –

“Langer is a bag floating in the wind.” Kevin Tucker

New Publication: Beyond the Dark Horizon