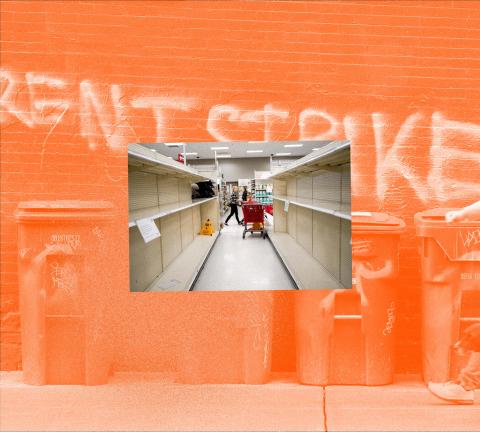 There’s no going back

The situation evolves so rapidly that even the latest news is somehow out of date. The speed of the crisis makes analysis feel impossible, critique more insufficient than ever – old concepts stripped bare by new realities. What can be said that won’t seem quaint by tomorrow? It’s hard to think and act at this pace, yet we must try.

The novel forms of social control we discussed last month have only accelerated and deepened. In a reversal of the usual circuit of innovation, what was debuted in Wuhan made its way to San Francisco and New York. By the end of March, three quarters of Americans were under some form of quarantine and businesses everywhere were shut down.

Economic measures to stave off the next financial crisis reveal the fiction of money and its real power over our lives. The closure of workplaces plunges millions further into precarity, but also demonstrates a social lie: the necessity of working. The economy typically presents itself as some mythical force structuring our activities. In reality, it’s how they govern us. Our time, labor, passion, and ingenuity channeled into frenzied uselessness, empty distraction, and systematic pillaging of everything worth a shit.

We have become a threat. Rent strikes, sick-outs, and pickets proliferate. Authorities pivot towards sending us back to our jobs, even at the risk of exposing thousands more to illness and death. Nevermind that no one knows the true number of infections. Nevermind that the virus could mutate into deadlier forms. They’re more interested in saving the markets than our lives. It’s the same calculation as ever.

The vastness and lethality of the pandemic continues to inspire comparisons to climate change. All those viral images of restored ecosystems were touching, if fake or misleading, not because they demonstrate the apparent resilience of nature, but because they show our shared desire to see this dismal system disappear so that life can make its resurgence. If there is one clear lesson of this worldwide tragedy, it’s that the economy is the very antithesis of life.

Life is the terrain on which we must combat the devastation of our time. Mutual aid groups spring up everywhere, sharing resources, best practices, courage and care. DIY prototyping and autonomous R&D of homemade masks and hand sanitizer augment our capabilities and supply frontline medical workers abandoned by the healthcare system. Networks form to share information, toolkits, memes, strategy and resolve. The hottest online guides are for baking bread, planting gardens, and working out at home. This dignified response is no less powerful for its inability to appear in public. Resonance abolishes distance.

As the number of infections eventually begins to fall alongside the collapsing financial markets, they will demand that we return to work, to jumpstart the machine, hoping to recompose the social order by declaration, by force, by algorithm. We will refuse, choosing instead to compose ourselves on an entirely new basis, starting from the relations and practices we’ve taken up. Freed from having to tend to the economy, we look after ourselves, each other, and the worlds we have begun to build.

Things cannot and will not go back to the way they were. Of this even our enemies are certain. Our ability to live out this refusal means starting now, building our networks and expanding our capacities, giving ourselves the means to survive their catastrophe.

No one is coming to save us. We have to give ourselves the means to survive.

Masks might be in short supply, but creativity is not. We’re adding our own submission to the DIY mix, courtesy an anonymous nurse and friend of ours. Having prototyped this design, they’ve been making them at home in-between shifts at the local hospital where cases have surged. Now they’ve created an easy-to-follow tutorial for us. With illustration by Dianna Settles, this guide is an essential contribution to our collective ability to care for ourselves and one another.

Hang tight for a video tutorial based on this design. We’ll send it around as soon as it’s ready.

An ongoing reading list for kids and caretakers in quarantine

No matter your age, the pandemic arrived as a suspension of the ordinary. For some kids, it must be a joy to be out of school. For others, it raises frightening questions about where they’ll eat or who they’re stuck at home with. And not even childhood is spared the grief of loved ones falling ill.

Bella Bravo had the idea to start a reading list geared towards kids and caretakers under quarantine. It’s not so much a matter of passing the time, but of strengthening bonds and giving imaginations space to explore what lies on the other side of crisis. For all those coming of age in a world that has lost its shit, let’s envision a future beautiful and strange, where we decide for ourselves what’s right, and where friendship overcomes all odds.

We’ve just relaunched our website. Have a look at the new version at inhabit.global. Featuring the full text of Inhabit in English, Spanish, and French, with more languages coming soon.

Submissions are open for our May issue. Get in touch: [email protected].

You’re on Path B,

The revelation of coronavirus and BLM

Sean Swain: How Buckingham Medical Made Me A Potential Death Statistic