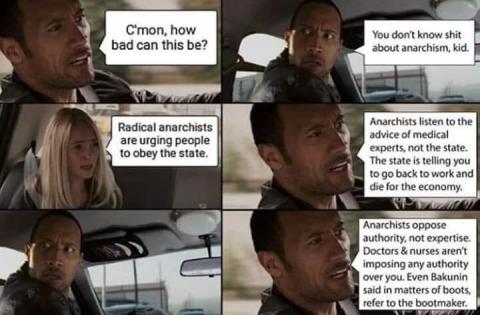 Last week (or was it the week before? What’s time anymore? In any case, it happened before this post) there was a meme circulating claiming that, in this time of increasing state repression, anarchists don’t obey the state but “listen to” health experts. This was offered as a corrective to a previous meme joking (?) that anarchists were urging people to obey the state with regards to the pandemic.

The actual quote from Bakunin is as follows:

“Does it follow that I reject all authority? Far from me such a thought. In the matter of boots, I refer to the authority of the bootmaker; concerning houses, canals, or railroads, I consult that of the architect or the engineer. For such or such special knowledge I apply to such or such a savant. But I allow neither the bootmaker nor the architect nor savant to impose his authority upon me. I listen to them freely and with all the respect merited by their intelligence, their character, their knowledge, reserving always my incontestable right of criticism and censure. I do not content myself with consulting a single authority in any special branch; I consult several; I compare their opinions, and choose that which seems to me the soundest. But I recognise no infallible authority, even in special questions; consequently, whatever respect I may have for the honesty and the sincerity of such or such individual, I have no absolute faith in any person. Such a faith would be fatal to my reason, to my liberty, and even to the success of my undertakings; it would immediately transform me into a stupid slave, an instrument of the will and interests of others.”

– Bakunin, What is Authority?

As this meme suggests, the concept of expertise is one that anarchists have been wrestling with or felt the need to justify for a very long time. Even those who may hesitate at the power exercised by experts and the authorities they abet may find themselves looking to those same people for life-and-death knowledge or treatment in the current pandemic. Yet the seemingly non-critical view of expertise voice in the meme above is certainly not the only instance I’ve seen of anarchists embracing technocrats and other medical authorities wholeheartedly.

How have you been relating to the medical establishment or public health authorities during the current pandemic? Do the essay by Bakunin or the meme reflect your own feelings on authority, and how or how not?