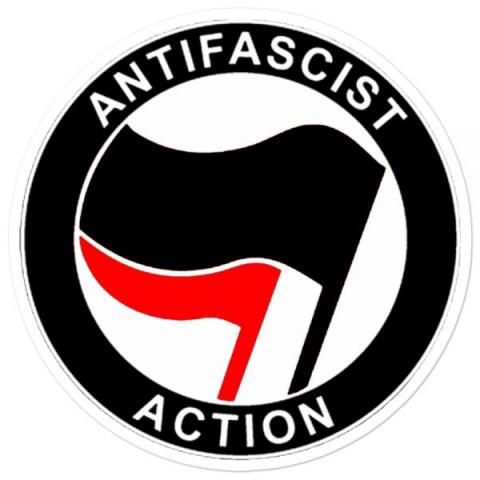 From Medium by Ausonia Calabrese

Before anything further is said, I must stress the fact that this is a critique coming from within the antifascist tradition. It is a self-appraisal of our discursive boundaries, to point (or beckon) towards that which we cannot speak of through the languages we have wrought for ourselves.

“Anarchy” — as I have discussed many times before — is produced by adding a negative prefix, “a(n)”, to the Greek word arkhe, which means a superior or commanding principle. Likewise, “antifascism” is produced by adding a negative prefix, “anti” to the English word “fascism,” to denote the movement which opposes itself to fascism. If this seems obvious, you are not incorrect. But the description is warranted, for the distinction here is subtle. In the former, the negation is not active but passive. It denotes a relationship of lack, i.e., the lack of a commanding principle. Thus why “anarchy” is sometimes used to define particular social relationships, that is, those social relationships which come about that lack a State. In the latter, the negation is active. It denotes an element which is positively opposed to fascism.

Active negation is, in a sense, a reification and intensification of passive negation. Like “antitheist” implies “atheist”, the “antifascist” implies both a hypothetical negative, lack-based element (perhaps termed “afascism”) and a positive, active component. And this positive, active component is where antifascism as a material movement lies. It is the confrontation of fascist groups on the streets, “boots on the ground” so to speak. The derivation of a positive aspect from a negative aspect is the Achilles’ heel of antifascism. With anarchy, or another passive-negation, there is no positive aspect inherently implied. The lack of something does not necessarily imply the presence of something else. It leaves questions unanswered, ambiguous, and open-ended, such that it appeals to a wide-breadth of situations and configurations. With antifascism arises a positive movement, that necessarily moves against fascism, and seeks to crush it. The death knell is made in the actual, material lack of fascism.

The antifascist must chain herself to her enemy: the strictures of the movement, which construct it, render it intelligible, and make meaning within it, are bound to that which it negates. What do antifascist groups do when Nazis are run out of town? They disband, fall back — until the next confrontation is called. Everything produced under the mantle of antifascism — actions, events, situations — are reliant on fascism for their existence. In that sense, antifascism is the inferior element, for it has only a dependent, conditional existence. Thus the constant, unending media spectacle of the cat-and-mouse games of black blocs facing off against rightist militants. It is always the antifascists reacting to and responding to fascism: when have antifascists convened except when the threat of fascists loom overhead?

Antifascist groups cannot win spaces, because they cease to be truly antifascist without the presence of fascists: when they do, they have become something else entirely. And as anarchists, we must move to win spaces away from the power of the State, of governance — such is the anarchist project in simple terms. This, however, is a function antifascism cannot provide alone.
Again, it must be stressed that this is a critique coming from inside the antifascist movement. This critique is nonmoral, and is by no means a rejection of antifascism or its tactics. In short, my critique is that antifascism fails to go far enough. It is by its very nature incomplete. It succeeds in pushing back fascist scum, but fails to do more than that.

In my view, it would be fruitful to work towards the expansion, elaboration, and transformation of antifascism into something with its own independent existence, that antifascism as we know it could be subsumed into. This is not to call for a movement in the traditional sense, but a proliferation of antifascist tactics transformed into a positive offensive term, not merely a reactive defensive term.

Against Individualism: The Individual Is Not So, by Ausonia Calabrese