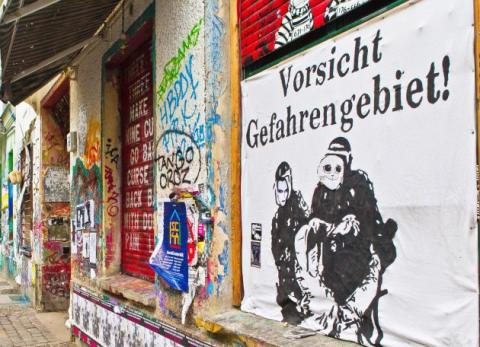 Wednesday, March 25th – Our lawyer told us that he should pass on a telephone threat from the police to us. The content of the threat was that the cops would enter Rigaer94 if Kadterschmiede would not close officially. After a due to timepressure admittedly short discussion, we then announced on twitter and our website that we would not open that day.

Already at 8 p.m. there were about ten team cars of a cop unit in the next vicinity and at the Wedekindwache (cop station in the south of Friedrichshain) the technical unit provided heavy equipment. For a large part of the evening the area of Rigaer Strasse, between Zellestrasse and Dorfplatz, was occupied or sealed off by police. In front of our door the new BP-unit (Brennpunkt- und Präsenzeinheit /“Criminal Hotspot and Presence-Units“ [1]) was stationed again. The usual yellow press and massmedia had been informed and was present on the street from early on.

A few days earlier we had published and postered a text with the title “Self-organization in a state of emergency – Why we still consider open social spaces important”[2]. Though we still politically think it‘s the right thing to do, we took a shot in the dark in two aspects. Neither had we considered the reaction of our enemy in the form of the state, nor had we removed all the uncertainties among ourselves regarding hygiene issues. So, because of our lack of a wider discussion and analysis around the topic of opening our own space we also seemed unprepared for the repression on that Wednesday. We had fallen right into the trap we set ourselves, as we would not have been able to defend any decision we could have made collectively.

Finally, we canceled our regular KüFA/VoKü and closed Kadterschmiede. The lack of collective analysis on the issue and the time pressure revealed the problems that were hidden in our procedures. The critiques that some of us had received individually for opening Kadterschmiede one week earlier, the massive statement of the scene on closing the collective spaces (which actually we wanted to counter with opening) and therefore the absence of open solidarity to our decision, our personal insecurity on virus issues as well as the avoidance of a potential raid in this scenario, were some of the reasons that led us to this decision.

As anarchists, (state) repression will always find us against it. The creation of a solidarity movement is a key tool for empowerment of the struggle and our fighting spirit and perseverance are the tip of our spear. We challenge the existence of the state and the commands it imposes on us. We analyze and critically examine its dictates, we are making our own analysis and we are fighting for its defense. But at the same time we understand our possibilities and our capacities and we set priorities and goals that will leave a positive legacy to the movement. The situation in front of our door, which we and our close neighbours are experiencing since a few months, which means the siege of the state lacays, controlling nearly every move out of and into this house, brings us into a quite defensive position. The state tries to prevent friends, comrades or neighbours to visit us. The enemy‘s goal of our isolation is clear to us. Our open conflict with authorities which we aim to push further and further, leads to a harsh reaction by them. Nothing new to us, but never the less pressing as long as we feel an absence of solidarity of a leftist-radical and anarchist scene. For these reasons we still retrace our decision of closing our space on Wednesday, while at the same time placing ourselves at the center of (self-)criticism about how to deal with the dilemma posed to us.

But despite all the contradictions and failures, through collective reflections we are confronted with our mistakes and we learn from them. The horizontal and the antihierarchical procedures are validated by these risks but they clearly show us the importance of profound discussion. We form collective answers and we strengthen our procedures. So that in the future we can appear stronger against our oppressors, with more suitable analytical tools and arguments and with more increased reflexes.

These processes of building collective structures, able to self-organize and self-defend become real and an actual example of our political values through our open structures. Through these we come into contact with society and the rest of its radical pieces, a contact ruptures the image created by mass media and the state. Relationships are formed and built, we are having the space and time for political growth and discussion. During the opening of Kadterschmiede it is possible to offer food for donation to people who are in need or simply do not want to participate in the commercialization, we build a space where we are aware of and fight various forms of discrimination. As well, open social spaces offer the possibility, during uprising social tension, for people to meet and organize. They bring the tension in their district and they become centers of struggles, welcoming the enemies of authority, state and capital and being hostile to the ones upholding the system‘s structures.

For these reasons – we are sure that there may be more – we consider open spaces a vital part of an anti-authoritarian movement and their defense necessary. That‘s why we one month ago explained in our text “Self-organization in a state of emergency – why we still consider open social spaces important” that Kadterschmiede remains open even in times of Corona.

At the same time, the reality that we experience every day, continues to trouble us. Through this crisis almost all the movement spaces are closed and a lot of political procedures are postponed, but we as well recognize that new political structures are built. Everyone has to deal with a situation in which the guidelines of the state are apparently accepted without any resistance even by most critically thinking people. Adaptability to the new order of things is sometimes considered necessary but also the political/movement response and resistance to the demands they want to impose on us is equally needed. Understanding the political weight of our actions and the political responsibility of our answers, it continues to trouble us the space that repression is winning day by day. We continue to believe that everyone can decide for themselves where they want to go, how long they want to walk, how long they want to sit in the park, who they want to sit with in the park. Meanwhile acting in a solidaric fashion can not mean to simply ignore the need of others, whether in a state of emergency or without. That‘s why we try to develop new strategies and political responses against our oppressors. Responses that would be able to support and defend our general political proposal for a society of solidarity, freedom and equality.

So, this situation lead us to come up with new ideas to keep up our fight in Northkiez. We welcome the spontaneous assemblies to reflect on possible methods and actions under the state of emergency, which led to manifestations like on Kotti [4] and the bikedemo [5]. For a month the Youthclub Keimzelle is doing a weekly Kiezradio from our balconies with informations, speaches on different topics and analyses, music, quizzes and Bingo. These helped creating new bonds between us other young people and our neighbours, whether on the streets or on the balconies, clearly visible outside, reclaiming the streets and places. Takeaway people kitchen in front of our house, to offer food and collective space for the same reasons as mentioned above. On Tuesdays and Thursdays we collect medication urgently needed in the camps on the greek borders and donations for prisoners.[3]

We want to push the discussion among anti-authoritarian, anarchist structures, now that nearly two months have passed after the implementation of this attempted state of emergency. How to deal with a situation like this, how to keep up the continuity of our political procedures and when to offensively open social spaces again, not making it dependent on a state‘s decision. Like this, we work towards fully opening Kadterschmiede again and are willing to take up the fight, for rebellious neighbourhoods and the revolt against any power mechanisms.